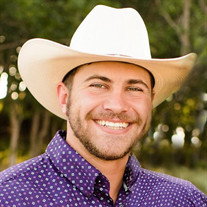 Layne Michael Meriwether, beloved son, brother and fiancée, tragically passed away on February 5, 2017, in Stillwater, Oklahoma at the age of 23. He was born August 8, 1993, in Oklahoma City, Oklahoma, to Michael and Kelly Meriwether. Layne truly lived life to the fullest and had a contagious, ornery grin that was sure to make you smile. He was genuine, determined, independent, godly and had a positive impact on all those who knew him. Layne graduated from Waynoka High School in 2012 where he was active in FFA, weightlifting, football, basketball, FCA and FCCLA. He also met his high school sweetheart and fiance, Hannah Darr, while attending school in Waynoka. They both attended college together at Oklahoma State University. Layne was going to graduate this May with a degree in agricultural economics. Layne had a passion for agriculture and especially the cattle industry. He showed cattle during elementary and high school with his brother Logan. He even raised his own cattle with his father. Layne recently purchased cattle with his fiance, Hannah, to further his passion in the beef industry. Layne loved reading, learning, shooting guns, fishing, trying new recipes and spending time with family and friends. Layne’s legacy will forever live on in his family and all those who he had an impact on. If you knew Layne, you could bet that he is in Heaven talking to our Heavenly Father about some scientific or historical fact about the beautiful streets of gold or the pearly gates or asking Him where the best fishing hole is located. He was preceded in death by his grandmother, Lavila Meriwether. Layne is survived by his parents, Michael and Kelly Meriwether of Waynoka, OK; two brothers, Travis Meriwether of Tuttle, OK, Logan Meriwether of Waynoka, OK; fiancé, Hannah Darr of Stillwater, OK; grandparents, Leroy and Rhonda Meriwether of Wheeler, TX, and Jack and Evelyn Young of Binger, OK; and many aunts, uncles, cousins, other relatives and friends. A scholarship fund has been set up in Layne's name at the Oklahoma Cattlemen's Foundation, PO BOX 82395, Oklahoma City, OK 73148 (okcattlemen.org/foundationdonation.aspx). Viewing will be at the Marshall Funeral Home in Waynoka Tuesday, from 11:00 am to 8:00 pm. Services: Waynoka High School Multi-Purpose Bldg, Wednesday, 10:30 AM, February 8, 2017, Waynoka, OK. Officiating: Rev. Marlin Hiett under the direction of Turner Funeral Home, Hinton, Oklahoma, condolences may be sent to the family at [email protected], or you can find us on facebook.com (Turner Funeral Homes).

Layne Michael Meriwether, beloved son, brother and fiancée, tragically passed away on February 5, 2017, in Stillwater, Oklahoma at the age of 23. He was born August 8, 1993, in Oklahoma City, Oklahoma, to Michael and Kelly Meriwether. Layne... View Obituary & Service Information

The family of Layne Meriwether created this Life Tributes page to make it easy to share your memories.

Send flowers to the Meriwether family.