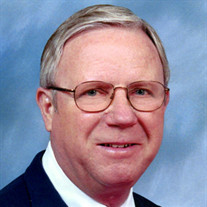 Funeral services for Leon Dale Schmidt will be 3:00 p.m. Friday, May 24, 2019, at the Alva First Christian Church (Disciples of Christ) with Pastor Ron Pingelton officiating. Interment will be in the Alva Municipal Cemetery under the direction of Marshall Funeral Home of Alva. Leon Dale Schmidt, son of the late Edd and Mary (Hoock) Schmidt, was born March 27, 1941, on a farm on Route 66 near Weatherford, Oklahoma, and passed away May 21, 2019, at Alva, Oklahoma, at the age of 78 years, 1 month, and 24 days. Dale went to Shilogh for the first grade, then attended Cordell schools graduating high school there. On March 18, 1988, he was united in marriage to Vaughna Easterling in Las Vegas, Nevada. They lived in Enid for 8 years and on the farm west of Aline for 22 years before moving to Alva just over a year ago. Throughout his life he worked as a farmer, carpenter, and electrician. He worked as the General Manager of Farmers Cooperatives for 39 years in Dacoma, Oklahoma, Burdett, Kansas, Darazett, Texas, Drummond, Oklahoma, and Carmen, Oklahoma, until his retirement in 2003. He was an active member of the First Christian Church and was involved in many of the activities. He was also a member of the Aline Lions Club and the Aline Chamber of Commerce. He enjoyed part time farming, cattle, horses, traveling, and woodworking. His family was always very important to him. Besides his parents, he was preceded in death by one son, Russell Schmidt; one step-son, Alan McCray; one granddaughter, Jamie Schmidt; one grandson, Jeremy Baxter; one son-in-law, David Whyburn; and two brothers, Leroy Schmidt and Gary Schmidt. Dale is survived by his wife, Vaughna, of Alva; two daughters, Kim Whyburn of Edmond, Jo Hammer and husband, Hoby, of Fairview; one step-son, Kevin McCray and wife, Mary, of Carmen; one daughter-in-law, Tammie Schmidt of Clinton; sister-in-law, Jean Schmidt of Midlothian, Texas; 12 grandchildren; 20 great grandchildren; other relatives and friends. Memorial contributions may be made through the funeral home to the First Christian Church Foyer Fund.

Funeral services for Leon Dale Schmidt will be 3:00 p.m. Friday, May 24, 2019, at the Alva First Christian Church (Disciples of Christ) with Pastor Ron Pingelton officiating. Interment will be in the Alva Municipal Cemetery under the direction... View Obituary & Service Information

The family of Leon Dale Schmidt created this Life Tributes page to make it easy to share your memories.

Funeral services for Leon Dale Schmidt will be 3:00 p.m. Friday,...

Send flowers to the Schmidt family.