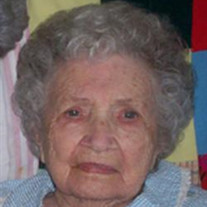 Graveside services for Leona Madeline Williams will be 10:30 a.m. Monday, August 18, 2008, at the Capron Cemetery with her first born great grandchild, Matthew Miller, officiating. Interment is under the direction of Marshall Funeral Home of Alva. Leona Madeline (Throckmorton) Williams, the second child born to the late Tom and Ella (Gwinup) Throckmorton, was born February 10, 1913, on the family farm north of Capron, Oklahoma, and passed away August 15, 2008, at Amarillo, Texas, at the age of 95 years, 6 months, and 8 days. Leona attended her first six years in a country schoolhouse. Upon entering the seventh grade she completed her education at the Capron School with eight in her senior graduating class. Leona and Chester Williams were married in 1935 in Wichita, Kansas. They lived near Capron where her husband was engaged in farming and she was a homemaker. Chet died in 1966 and at that time Leona moved to Alva, Oklahoma. Leona was an avid reader, and passed her love of reading down to her children, grandchildren, and great-grandchildren. Her prized possessions were her flowers, especially violets, and any one who knew her shared these because she always gave everyone a "start". She traveled from the east coast to the west coast by bus, train, car, and van and loved every part of these United States, but was glad to go home to her family, who always came first in her life. A highlight of her travels included her only plane trip, when she went to Germany in 1965 for the birth of her first grandchild. As her failing health took its& toll, her great-grandchildren were the only ones rewarded with a smile. Leona was raised a Methodist and after moving to Alva attended the Friends Church. She was always very thankful that her family served God. She has been ready to go to her heavenly home for many years. She was preceded in death by four siblings; Gerald Throckmorton, Francis Mantz, Madie Crutchfield, and Bill Throckmorton. She is survived by her son and wife, Curtis and Judi, of Rose Hill, Kansas, grandsons, Chris of Goddard, Kansas, Ben and wife Anne of Wichita, Kansas, Dan and wife, Melanie, and Michael, all of Rose Hill. Also, her daughter and husband, Dianne and Gary Doty of Amarillo, Texas, granddaughters, Denise and husband, Scott Miller, of Edmond, Oklahoma, and Pam and husband, Jeff Whelchel, of Amarillo. She has 10 adorable great grandchildren. Survivors also include a sister, Joan Eakin, of Ringling, Oklahoma, and a brother and his wife, Tommy and Joanne Throckmorton, of Moore, Oklahoma, and a very special sister-in-law, Lucy Throckmorton of Alva. Also, numerous nieces and nephews, many who lovingly called her "Aunt Nonie". She will be missed by the residents and staff at Potter House in Amarillo, an assisted living facility, where she had made her home for the last nine years. She received excellent care and love from the people there, who went above and beyond the call of duty to do everything possible to keep her comfortable. Everyone who knew her grew to love her. Memorials may be to the Alzheimers Association, or Potter House Life Enrichment Program.

Graveside services for Leona Madeline Williams will be 10:30 a.m. Monday, August 18, 2008, at the Capron Cemetery with her first born great grandchild, Matthew Miller, officiating. Interment is under the direction of Marshall Funeral Home of... View Obituary & Service Information

The family of Leona Williams created this Life Tributes page to make it easy to share your memories.

Graveside services for Leona Madeline Williams will be 10:30...

Send flowers to the Williams family.