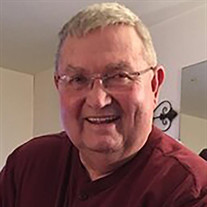 Memorial services for Leonard James “Lennie” Haight will be 2:00 p.m. Saturday, February 6, 2021, at the Alva Church of God with Rev. Bob Brown and Pastor Nathan Braudrick officiating. Lennie was cremated at his request under the direction of Marshall Funeral Home of Alva. Masks are suggested at the service. The service will be live streamed on the Marshall Funeral Home Facebook page. Leonard James “Lennie” Haight, son of the late LeRoy James and Alta Marie (Stallings) Haight, was born August 6, 1952, in Alva, Oklahoma, and passed away January 29, 2021, in Enid, Oklahoma, at the age of 68 years, 5 months, and 23 days. Lennie graduated from Alva High School with the Class of 1971, then attended Central Bible College in Springfield, Missouri. In 1974, he was united in marriage to Jill Mercer. He was a jewelry maker and joined the Alva Fire Department as a full time firefighter, retiring in 2005 after 30 years of service. On January 31, 1997, he was united in marriage to Anne Crusinbery in Memphis, Tennessee. He also owned and operated NW Fire and Safety for many years. After his retirement from the fire department he became a fire safety instructor. Lennie was a member of the Alva Church of God and ACTE. He reorganized the Alva retired fighter group. He enjoyed fishing, bowling, and umpiring softball and baseball. Lennie is survived by his wife, Anne Haight, of Alva, five sons, Jeremy Haight and wife, Stephanie, of Sapulpa; Jimmy Haight and wife, Amee, of Alva; Jarrod Haight and wife, Shandi, of Stillwater, Kyle Stauffer of Jacksonville, Florida, and Kelly Stauffer and wife, Amanda, of Aline; one brother, Larry Haight and wife, Rebecca, of Redding, California; and his stepmother, Edith Haight. Also surviving are 12 grandchildren, Taylor Haight, Tara Haight, and Tabitha Schultz all of Muskogee, Austin Haight of Ringwood, Charles Shafer of Alva, Serena Haight, Jacob Haight, both of Sapulpa, Ainsley Haight, Addisyn Haight, and Abel Haight, all of Stillwater, and Hunter and Aspen Stauffer, both of Aline; two great grandchildren, Corbin and Jaxson Brown, both of Muskogee; other relatives and many friends. Memorial contributions may be made through the funeral home to the Alva Retired Firefighters Association or the Northwest Technology Center for a scholarship. Remembrances may be shared with the family at www.marshallfuneralhomes.com.

Memorial services for Leonard James &#8220;Lennie&#8221; Haight will be 2:00 p.m. Saturday, February 6, 2021, at the Alva Church of God with Rev. Bob Brown and Pastor Nathan Braudrick officiating. Lennie was cremated at his request under the... View Obituary & Service Information

Memorial services for Leonard James “Lennie” Haight will be 2:00...

Send flowers to the Haight family.