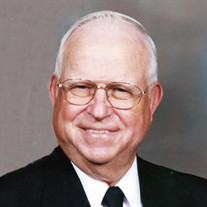 Funeral services for Earl Fleming will be Saturday, August 21, 2021, at 1:30 pm at the First United Methodist Church with Pastor Katie Hill officiating. Interment will be in the Alva Municipal Cemetery under the direction of Marshall Funeral Home of Alva. Leslie Earl Fleming, son of the late James Hugh Fleming and Lillie Ellen Bowker, was born February 23, 1932, at Buffalo, Oklahoma, and passed away August 13, 2021, in Alva at the age of 89 years, 5 months and 19 days. Earl graduated high school in Rosston, Oklahoma, and attended Northwestern Oklahoma State University. On February 19, 1953, he was united in marriage to Betty Jo Ann Prophet at Buffalo when he was home on furlough from the Army. To their union 2 children were born, James Earl Fleming and Jo Ellen Fleming. He was in the US Army during the Korean War from August 1952 to August 1954. He was honorably discharged with the rank of Sergeant. He went to Oklahoma Barber College in Oklahoma City and was a barber for 43 years. His last hair cut was given to his son, James. Earl is a 32nd degree Mason and a member of the Order of Eastern Star. He was the Worshipful Master 2 times for the Alva Masonic Lodge #105 and held all the other offices in the lodge. He held the offices of Chaplain, Worthy Patron, Associate Patron, Marshall, Treasurer and Warder in the Order of the Eastern Star. He was a blessing to all in the lodge; ever willing to help with kind words, service to others and a Christian example to all. He was Chaplain in both associations. Brother Earl has been a mentor, teacher and leader. He exemplified that the heart is where a man is made a mason. His upright walk with his family, friends, countrymen and brother Masons will be missed in the lodge, community and nation. Earl enjoyed being with his family and friends. He enjoyed planning and being prepared. Camping at the lake provided many such opportunities and he always did whatever he personally could to make those trips as easy and stress free as possible. Be it a 5th wheel needing to be set up at a camp site, or a home at the lake, he made sure the place where his family slept, the boat and lake toys they would use were always clean, repaired and ready to be enjoyed. He spent countless hours driving the boat. It may have been to cruise the lake, trolling for fish or if kids were around, just a lot of quick starts and stops so kids could learn how to ski. He piloted the boat as one kid after another learned to ski, first with two skis, then with only one. And, almost always just when he thought his driving was over for the day, someone would ask, "Grandpa, did you bring the trick skis?" He'd smile, flip up the seat and toss the trick skis in the water. He would laugh as one kid after another tried a 360. Despite the abuse heaped on his boat by grandkids, he always kept the boat in perfect working condition. But when kids are involved, sometimes there's just no saving the upholstery. He was not deterred. One year, he and his wife Betty took out the seats, repaired the framework, and re-upholstered that boat and it was absolutely ready for the next boating season. Earl was preceded in death by his loving wife Betty, his parents, son, James Earl, brother-in-law, Frank "Shorty" Barton, and grandson, Tom Kemp. He is survived by his daughter Jo Ellen Fleming and Jules Fleming of Alva; two brothers, Calvin and wife, Wilma, and Joe and wife, Anita, and his sister, Mary Ellen Barton, all of Wichita. He is also survived by his grandchildren, Ashley Kemp, Aaron Fleming and wife, Abby, Mike Carter and wife, Sherece, Mark Carter and wife, Melis, Jessica Fleming, Justin McOsker and wife, Daniele, and Jennifer Schafer and husband, Craig; great grandchildren, Alex Kemp-Williams, Megan Kemp-Williams, Tommy Kemp, Hudson McOsker, Hayden McOsker, Shelby Schafer, Clayse Schafer, Bane Schafer, Chauncey Schafer, Adley Schafer, Collin Condit, KJ Carter and Luke Carter. Earl was actively involved with his family every chance he could up to the day of his passing. Each and every one of his family members were enriched by having him in their lives and he will be deeply missed. In lieu of flowers, memorial contributions may be made through the funeral home to Alva Masonic Lodge #105.

Funeral services for Earl Fleming will be Saturday, August 21, 2021, at 1:30 pm at the First United Methodist Church with Pastor Katie Hill officiating. Interment will be in the Alva Municipal Cemetery under the direction of Marshall Funeral... View Obituary & Service Information

Funeral services for Earl Fleming will be Saturday, August 21,...

Send flowers to the Fleming family.