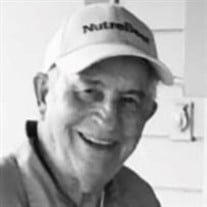 Funeral services for Leslie “Corky” Houston will be 2:00 pm Monday, January 25, 2021, at the First United Methodist Chapel with Rev. Katie Hill officiating. Interment will be in the Alva Municipal Cemetery under the direction of Marshall Funeral Home. The service will be livestreamed on the Marshall Funeral Home Facebook Page. Corky Houston, son of the late Samuel Neil and Evia (Shreeve) Houston, was born October 4, 1928, northwest of Alva, and passed away January 21, 2021, at Alva, at the age of 92 years, 3 months, and 17 days. Corky lived his entire life in Alva except for the few years he spent in the United States Navy during the Korean War. On August 4, 1960, he was united in marriage to Maxine Olson. They celebrated their 60th Wedding Anniversary in August 2020. They had two children: Dal and Mary Ann. He was a carpenter and handyman. Leslie enjoyed fishing, gardening, tinkering, breaking horses, and was a collector of many things. He was a member of the VFW and the Antique Car Club. Corky took credit for Regis Philbin’s success, who he served under in the Navy. During which time he typed movie reviews for Regis who told him, “Houston this is going to make me a star.” Besides his parents, he was preceded in death by a brother, Allen Houston; and two sisters, Sue McPherson and Judy Miller. Leslie is survived by his wife, Maxine, of Alva; a son, Dal Houston and wife, Beki, of Alva; a daughter, Mary Ann Powell and husband, Bryan, of Edmond; five grandchildren, Emersyn, Drew, and Evan Powell, all of Edmond, and Samuel and Harper Houston, both of Alva; a brother, Sam Houston of Stillwater; two sisters, Wanda Babcock of Stillwater, and Janice Wardrop and husband, J.D., of Alva; one brother-in-law, Neil Olson of Laneville, Texas; one sister-in-law, JoAnne Houston of Tucson, AZ, many nieces and nephews, other relatives and friends. Memorial contributions may be made through the funeral home to Share Convalescent Home.

Funeral services for Leslie &#8220;Corky&#8221; Houston will be 2:00 pm Monday, January 25, 2021, at the First United Methodist Chapel with Rev. Katie Hill officiating. Interment will be in the Alva Municipal Cemetery under the direction of... View Obituary & Service Information

Funeral services for Leslie “Corky” Houston will be 2:00 pm Monday,...

Send flowers to the Houston family.