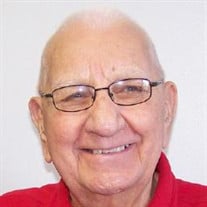 Memorial services for Lester Warren Corr will be 1:30 p.m. Monday, February 27, 2017, at the First United Methodist Church with Rev. Dr. Carol Cook-Moore officiating. Interment was prior to the service under the direction of Marshall Funeral Home of Alva. Lester Warren Corr was born August 20, 1924 to Ray and Agnes Leatherman Corr on the family farm near Capron, OK and passed away February 22, 2017 at the age of 92 years, 6 months and 2 days. Lester graduated from Capron High School in 1942. On August 21, 1943, he was married to Christine Rathgeber. They were married for almost 62 years before she passed away in 2005. They lived all their married life in Alva except for two years in Tucson, Arizona. To this union three children were born, Paul, Joyce and Judy. Lester joined the Army in 1943 and served in Germany in WWII. He served as a 1st Sergeant during the war at just 19 and received two Purple Hearts for injuries received in combat. He had many stories to tell. After the war, Lester began a construction company and built many houses in Alva and Tucson, Arizona. Later he started C & G Sporting Goods and sold Farmers Insurance until he retired in 1986. Lester was a member of the First United Methodist Church where he served as Treasurer for many years. He was also an active member of Post 2847 of the VFW in Alva, serving as Post Quartermaster from 1975-1982. Lester was preceded in death by his parents, brothers LaVerne and Lawrence Corr, sisters Donna Mae Haynes and Elfreda Rogers and granddaughter-in-law Hope Taranto. Lester is survived by his son Paul and wife, Deb, of Alva, Oklahoma, two daughters, Joyce Pittinaro and husband, Carmen, of Port St. Lucie, Florida and Judy Taranto and husband, Mike, of DeBary, Florida. Also surviving are seven grandchildren, Warren Corr of Alva, Oklahoma, Claudia Beck and husband, Walter, of Rio Rancho, New Mexico, Melodi Gentry and husband, Todd, of Bethany, Oklahoma, Michael Taranto of Deltona, Florida, Matthew Taranto of DeBary, Florida and Anthony Taranto and wife, Lauren, of Maricopa, Arizona, and Justin Pittinaro of Stow, Vermont; 14 great grandchildren, Cristi Rife and husband, Daren, of Gentry, Arkansas, Les Corr, Wendi Corr of Alva, Oklahoma, and Malissa Jordan and husband, Calvin, of Buffalo, Oklahoma, Melissa and Krystal Beck of Rio Rancho, New Mexico, Logan Gentry of Stillwater, Oklahoma, Blythe Yarborough and husband, Trevor, of Oklahoma City, Oklahoma, Bailey Gentry of Bartlesville, Oklahoma, and Kaylyn Gentry of Bethany, Oklahoma, Madison Taranto and Gio Taranto of DeBary, Florida, Dave and Marketa Pittinaro of Stow, Vermont; 6 great-great grandchildren, Dakota, Adasun and Dalten Rife, Zachariah Keitel, Brayden and Tucker Jordan. Memorial contributions may be made through the funeral home to the Wesley House, the United Methodist campus ministry in Alva. Services may be view at http://citylinktv.com/channel/alva-marshall-funeral-home/

Memorial services for Lester Warren Corr will be 1:30 p.m. Monday, February 27, 2017, at the First United Methodist Church with Rev. Dr. Carol Cook-Moore officiating. Interment was prior to the service under the direction of Marshall Funeral... View Obituary & Service Information

The family of Lester Warren Corr created this Life Tributes page to make it easy to share your memories.

Memorial services for Lester Warren Corr will be 1:30 p.m. Monday,...

Send flowers to the Corr family.