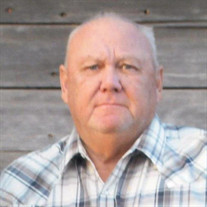 Funeral services for Levi J. Schultz will be 2:00 p.m. Tuesday, October 6, 2020, at the Marshall Funeral Home Chapel with Rev. Neal Gordon officiating. Interment will be in the Alva Municipal Cemetery under the direction of Marshall Funeral Home of Alva. Levi J. Schultz, son of the late Jake and Vera (Beagley) Schultz, was born October 13, 1949, in Alva, and passed away October 1, 2020, at the age of 70 years, 11 months, and 18 days, doing what he loved to do. Levi graduated from Freedom High School in 1967 and attended Northwestern State College. He served with the Oklahoma National Guard from August, 1968, until he was honorably discharged in 1974. When Levi came to Alva to attend Northwestern State College, he held several jobs including at the VIP Supper Club, the VIP Ranch, and the Woods County Assessor’s Office. But his true passion was having his own cattle on the farm. On December 27, 1970, he was united in marriage to Deborah Ann Goodwin. They made their home in Alva. To this marriage they welcomed three children, Chanda, Matthew, and Laci. Besides his parents, he was preceded in death by an infant sister, Nova Jean; a brother-in-law, Jim Duncan; and a nephew, Clint Schultz. Levi is survived by his wife, Debbie of Alva; a daughter, Chanda Peters and husband, Tommy, of Woodward; a son, Matthew Schultz and wife, Alicia, of Anthony, Kansas; a daughter Laci Schultz of Alva; two grandchildren, Luke Peters and Madilyn Schultz. Also surviving are a brother, Clark Schultz and wife, Shirley, of Alva; two sisters, Trixie Leslie and husband, Jim, of Dacoma, and Roxie Duncan of Carthage, Texas; a brother-in-law and sister-in-law, Gary and Paula Goodwin, of Sugar Land, Texas; nieces, nephews; other relatives and friends. Memorial contributions may be made through the funeral home to either the Alva, Capron, or Greenleaf firefighters. The service will be livestreamed on the Marshall Funeral Home Facebook page. Visitation will be Sunday and Monday from 9:00am until 7:00pm and Tuesday from 9:00am until service time.

Funeral services for Levi J. Schultz will be 2:00 p.m. Tuesday, October 6, 2020, at the Marshall Funeral Home Chapel with Rev. Neal Gordon officiating. Interment will be in the Alva Municipal Cemetery under the direction of Marshall Funeral... View Obituary & Service Information

The family of Levi J. Schultz created this Life Tributes page to make it easy to share your memories.

Send flowers to the Schultz family.