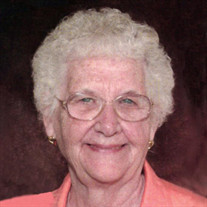 Memorial services for Lois Lea Sterba will be 2:00 p.m. Wednesday, October 23, 2019, at the Alva Church of God with Rev. Bob Brown officiating. There will be a private interment for the family prior to the service under the direction of Marshall Funeral Home of Alva. Lois Lea Sterba, daughter of the late Floyd William and Sophia Emma (Lavell) Andrews, was born August 19, 1934, at McDonald, Kansas, and passed away October 19, 2019, at Alva, Oklahoma, at the age of 85 years and 2 months. Lois graduated high school in Atwood, Colorado, and attended college in Greely, Colorado. She was united in marriage to “JB” Beecham where they operated a Sears store. To this union five sons were born. On December 26, 1999, she was united in marriage to Donald Elliot Sterba in Lafayette, Colorado. They moved to Alva, Oklahoma, where she worked at Alva State Bank. She obtained her real estate license and started working for Gene Filson Real Estate as an agent and broker. When Gene passed away, she bought the company and later it was affiliated with United Country Real Estate. Besides her parents, she was preceded in death by her son, Scott Andrew Beecham; and one brother, Keith Andrews. Lois is survived by her husband, Don, of Alva; four sons, Michael Jay Beecham and wife, Phyllis, of La Junta, Colorado, Alan Clay Beecham and wife, Becky, of Del Norte, Colorado, David Layne Beecham of Broken Arrow, Oklahoma, and Evan Kerry Beecham and wife, Sue, of Hillrose, Colorado; and one sister, Lorene Jacobson of Greely,Colorado. Also surviving are ten grandchildren, Sarah Beecham of LaJunta, Colorado, Michelle Blackwell and husband, Daniel, of La Junta, Colorado, Joshua Beecham of La Veta, Colorado, Eric Beecham and wife, Nichol, of Atlanta, Georgia, Crystal Tafoya and husband, Daniel, of Del Norte, Colorado, Dannelle Beecham of Tulsa, Deanne Beecham of Tulsa, Jay Beecham and wife, Amber, of Ft. Morgan, Colorado, and Kari Beecham of Ft. Morgan, Colorado, and Jari Schiefelbein of Sidney, Nebraska; ten great grandchildren, Cayden, Malachi, Daniel, Alona, Lorelai, Sarina, Chayce, Kiptyn, Caden, and Makenna; other relatives and friends. Memorial contributions may be made through the funeral home to Freedom Gates Boys Ranch in Kiowa Kansas.

Memorial services for Lois Lea Sterba will be 2:00 p.m. Wednesday, October 23, 2019, at the Alva Church of God with Rev. Bob Brown officiating. There will be a private interment for the family prior to the service under the direction of Marshall... View Obituary & Service Information

The family of Lois Lea Sterba created this Life Tributes page to make it easy to share your memories.

Memorial services for Lois Lea Sterba will be 2:00 p.m. Wednesday,...

Send flowers to the Sterba family.