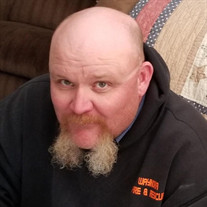 Lonnie Leroy Bolar, “Scoob,” 45-year-old Waynoka resident, passed away Friday, January 29th, 2021, while heroically trying to save the lives of others. Funeral services will be held at 10:00am, Friday, Feb 5th, 2021 in the Multi-Purpose Building at Waynoka High School with John O’Keefe officiating. Interment following at the Waynoka Cemetery. Arrangements are under the direction of Marshall Funeral Home of Waynoka. For safety purposes, face masks are requested for those in attendance. The service will be live streamed on Marshall Funeral Home Facebook page. Lonnie Leroy Bolar, was born on April 23, 1975 in Alva, Oklahoma to Sara Carlson and the late Rex Bolar. Lonnie attended Freedom school’s thru 7th grade and continued his education in Waynoka, graduating from Waynoka High School in 1993. Lonnie was involved 4-H, FFA, Jr. High Basketball, Jr. High Football. Lonnie’s high school football career was cut short, one day to be exact, when the coach told him he would have a curfew and drinking alcohol would not be tolerated, Lonnie opted out! Lonnie received many awards in singing, rodeoing and construction trade class. After graduation, Lonnie attended Tulsa Welding School. Later, Lonnie returned to Waynoka. Lonnie became a member of the Waynoka Fire Department on January 23, 2006. Lonnie and Kim Kutz had two daughters, Shadow Michelle and Destanee Dawn. In 2000, Lonnie married Tamara Shelton, to this marriage, three more children were born, Bronc Lane, Riggin Keeper and Trigg Blayne. In 2010, Lonnie was married to Janet Gerdes. Lonnie made sure that his blended family was “one family” and taking care of everyone was his top priority. Lonnie enjoyed planning Fishing Tournaments with his dad, Rex, for the kids in the community. He also enjoyed hunting rattlesnakes all over Woods and Woodward County, with his mother, Sara. Lonnie loved watching and attending NASCAR, touring the United States on his Honda Goldwing with family and his Harley Loving Friends. In 2010, Lonnie made his dream come true, opening and owning his own bar, Scoob’s Tavern. Scoob’s was “Where the Neighborhood’s Finest Hang Out.” If you were not a friend or family of Lonnie, you would be by the time you left his bar. Scoob’s Tavern hosted many fundraisers to benefit friends in the community. Lonnie was known for his “Elm Street Block Parties.” Lonnie was a devoted father, always putting his children first. Destanee recalls a time when Lonnie begged her to drive him home from the bar in the jeep, only problem was, she didn’t know how to drive a standard and killed it about every 10 seconds, Lonnie was on his phone and every time Destanee killed the jeep, Lonnie would say some choice words about how they were never going to make it home. Lonnie loved taking the boat out and fishing with his son Bronc, (even though neither one of them knew how to swim.) Believe it or not, when Lonnie and Riggin were together, if there was a Starbucks around, they would go every time. Lonnie loved taking the kids to Arbuckle Wilderness, he found great joy in rolling the windows down and locking them so the kids couldn’t roll them up when the ostriches and camels poked their heads in. Lonnie was teaching Trigg to ride and repair his dirt bikes after wrecking them. Camping had become Lonnie’s latest love; most weekends were spent camping with his family and friends at “Woodstock.” Through camping and miles of wide-open spaces Lonnie introduced his kids to dirt bikes. Lonnie and the kids would ride from sun up to sun down. Since Lonnie took on the sport of dirt biking, he made sure every damn kid in the neighborhood had a dirt bike! Lonnie was Foreman for Woods County District 3, owner of Scoobs’ Tavern, weekend Heavy Equipment operator for Frontier Rodeo and Luddington Cattle and was serving as the Waynoka Fire Chief. Lonnie enjoyed being Fire Chief and had a passion for fighting fires. He thoroughly enjoyed attending fire trainings. Besides his father, he was preceded in death by one daughter, Shadow Bolar. Lonnie is survived by his wife, Janet Gerdes, of Waynoka, two sons, Bronc Bolar and Trigg Cunningham, two daughters Destanee and Riggin Bolar and his best friend Tamara Bolar, all of Waynoka; his mother, Sara Carlson and husband, Denis, of Freedom; his stepmother, Sharlotte Bolar and Dwight Biel of Waynoka; two brothers, Lynn Bolar and wife, Tippe, of Freedom, and Pake Carlson and wife, Jackie, of Freedom; two sisters, Pebbles Luddington and husband, Ky, of Freedom, and Myka Seiger and husband, Waylon, of Waynoka; “Grumpa’s” three grandchildren, Kreaklynn, Boone, and Lariett, all of Waynoka; his beloved Chocolate Lab, CoCo Louise Bolar, and other relatives and many friends. He deeply loved his children, grandchildren and his family. Lonnie lived and enjoyed every day as it was his last by doing the things he loved. Memorial contributions may be made through the funeral home to the Bolar Love Fund at Corebank in Waynoka or the Waynoka Fireman’s Fund.

Send flowers to the Bolar family.