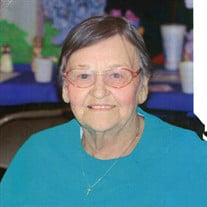 Mass of Christian burial for Lubomira “Ruby” Kaczor will be 10:00 a.m. Friday, January 19, 2018, at Our Mother of Mercy Catholic Church with Father Bala Sagili Jesudas serving as the celebrant. Interment will be in the Waynoka Municipal Cemetery under the direction of Marshall Funeral Home of Waynoka, LLC. Lubomira “Ruby” Kaczor, daughter of the late Lusha and Pavlo Chudak, was born August 28, 1926, in a small village in southern Ukraine, and passed away January 14, 2018, at Alva, Oklahoma, at the age of 91 years, 3 months, and 16 days. Because of the Communist movement at this time in history, her young life was difficult and involved family separation. In 1941 Ruby was taken from the Ukraine and sent to a German prison camp where she became a slave laborer. While in the camp, she met her husband, Stanislaw (Stanley) Kaczor. They were allowed to marry on May 16, 1943. The war ended in 1945 and they were liberated. On October 14, 1949, Ruby, Stanley, and daughter, Marisha, were admitted to the United States and eventually settled in Waynoka, Oklahoma. Stanley worked for the railroad and Ruby cleaned houses. Later she started working in restaurants and became known for her good cooking. She worked in several restaurants in Waynoka, including Pop Williams Café, Miller’s Café, Calder’ Café, Rock Café, and the Dairy Maid. She was a devoted member of Our Mother of Mercy Church. After retirement, she enjoyed gardening and keeping a beautiful yard. She also continued her cooking and became known for her wonderful pies. Besides her parents, Ruby was preceded in death by her husband, Stanley; three brothers and two sisters. Ruby is survived by her three daughters, Marisha Hendrick and husband, Gerry, of Alva, Libby Stewart and husband, Rocky, of Cimarron, Kansas, and Twyla Kaczor of Alva; four grandchildren, Shelly Cliburn and husband, Dave, Misti Hendrick, Marty Hendrick and wife, Jessica, and Brandi Stewart and wife, Lauren; three great grandchildren, Heston Hendrick, and Sabastian and Saylor Stewart; other relatives and friends. In lieu of flowers memorial contributions may be made through the funeral home to Our Mother of Mercy Catholic Church. Goodbye, Mom. We love you.

Mass of Christian burial for Lubomira &#8220;Ruby&#8221; Kaczor will be 10:00 a.m. Friday, January 19, 2018, at Our Mother of Mercy Catholic Church with Father Bala Sagili Jesudas serving as the celebrant. Interment will be in the Waynoka Municipal... View Obituary & Service Information

The family of Lubomira "Ruby" Kaczor created this Life Tributes page to make it easy to share your memories.

Mass of Christian burial for Lubomira “Ruby” Kaczor will be 10:00...

Send flowers to the Kaczor family.