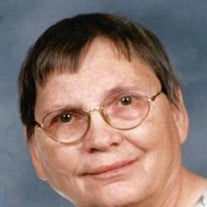 Funeral services for Lucy Arndt will be 10:00 a.m. Friday, April 15, 2016, at the Alva Church of the Nazarene with Pastor Tom Felder and Rev. William S. Kalfas officiating. Interment will be in the Alva Municipal Cemetery under the direction of Marshall Funeral Home of Alva. There will be a visitation with the family Thursday April 13, from 6:00 p.m. to 8:00 p.m. at the funeral home. Lucy Arndt, daughter of the late Emil and Viola Goldie (Watters) Neuenschwander, was born June 15, 1932, at Knowles, Oklahoma, and passed away April 10, 2016, at Oklahoma City at the age of 83 years, 9 months, and 25 days. She graduated high school at Stidham, Oklahoma, in 1950 and went on to attend college at Northwest Territorial Normal School. On April 3, 1952, she was united in marriage to Wilford Arndt at Alva. To this marriage nine children were born, Zeona, Newanta, Wynona "Noni", Zeda, Willard "Lynn", twins Carla and Darla, and twins Diana and Dana. They made their home in Alva where she raised her family. Lucy was a member of the Church of the Nazarene. She was called mom and grandma Lucy by many besides her family. She loved attending her grandchildren's and great grandchildren's activities. She loved cooking, especially for others. Many made their requests for her to make their favorite dishes to bring to gatherings. She taught herself to quilt and enjoyed making them for each family member. Lucy worked at Beadles Nursing Home since May 1963. She loved her job and the people at Beadles. She retired after many years, but still enjoyed helping with the Luau and the Senior Olympics. Besides her parents, she was preceded in death by five brothers, Jacob "Jake" Neuenschwander, Jonas Neuenschwander, Carl Neuenschwander, Bert Neuenschwander, and Emil Neuenschwander, Jr.; six sisters, Lydia Rose, Ruth Ickler, Betty Neuenschwander, Mary Neuenschwander, Doris Bradshaw, and Cora Shugart; a son-in-law, Albert McKinley; a granddaughter, Elizabeth Kristen Utterback; and a great granddaughter, Chesney Rae Starks. Lucy is survived by her children, Zeona McKinley of Alva, Newanta Kilmer and husband, George, of Alva, Wynona "Noni" Knopp and husband, Richard, of Okarche, Zeda Wythe of Yukon, Willard "Lynn" Arndt of Alva, Carla Smart and husband, David, of Alva, Darla Utterback and husband, Frank, of Enid, Diana Arndt of Alva, and Dana Kirkpatrick and husband, Tim, of Enid; sister, Daile Sacket of Alva; sister-in-law, Jaunita Neuenschwander of Ponca City; and nephew and niece that she was like a second mother to, Gary White of Woodward and Gloria Thorpe of Colorado Springs, Colorado. Also surviving are thirteen grandchildren, Michael Williamson and wife, Nicole, of Yukon, Tyler Wythe of Yukon, Damien Starks and wife, Brenda, of Alva, Samantha Kilmer of Alva, Jason Utterback of Oklahoma City, Bridget Eck and husband, Joseph, of Enid, Megan Stephens and husband, Dusty, of Alva, Marie Fox and husband, Will, of Alva, Jessica Barkhurst and husband, Nick, of Wichita, Kansas, Erica Hamilton of Alva, Mason Hamilton of Paris, Texas, Daniella Watkins of Oklahoma City, and Zach Smart of Alva; thirteen great grandchildren, Chandler Starks of Alva, William and Chris Eck of Enid, Willow and Ash Fox of Alva, Kaeden Wolff of Alva, Caleb, Leah, and Allie Williamson of Yukon, Collin and Ellyana Barkhurst of Wichita, Kansas, Aiden Watkins of Oklahoma City, and Payton Graham of Alva; many other relatives and friends. Memorial contributions may be made through the funeral home to the Church of the Nazarene for the Nursery Remodel.

Funeral services for Lucy Arndt will be 10:00 a.m. Friday, April 15, 2016, at the Alva Church of the Nazarene with Pastor Tom Felder and Rev. William S. Kalfas officiating. Interment will be in the Alva Municipal Cemetery under the direction... View Obituary & Service Information

The family of Lucy Arndt created this Life Tributes page to make it easy to share your memories.

Send flowers to the Arndt family.