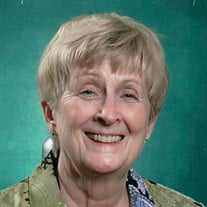 Memorial services for Lyla Lee Cropp will be 10:30am Monday, February 8, 2021, at the Kiowa Congregational Church with Bud Ruggia officiating. Cremation arrangements are under the direction of Marshall Funeral Home of Alva. Lyla passed from this world on February 4, 2021 at the age of 87 years, 1 month, and 24 days. She was born along with her twin brother, Lyle, on December 11, 1933, at home in Kiowa. She was raised in Kiowa and graduated from Kiowa High School in 1951. During her growing up years, she helped out in her Dad’s grocery store, known as the “Community Grocery.” She married Lee Cropp in July 1951. They had four children: Stanley, Leanne, Cindy, and Brenda. After 29 years they parted ways. In 1981, she married Jack Cropp. She was a homemaker and also worked in her husband’s accounting office until 2020 and managed their “Guest Lodge” motel in Kiowa from 1999 until they sold it in 2008. She went to work as a volunteer at the Kiowa General Store and served as the treasurer, as well as other duties until December 2018. Besides her parents, Mary and Bill Botkin, she was preceded in death by her brother, Lyle Botkin and her sister, Billie Marie Kraft. Lyla is survived by her husband, Jack Cropp of the home; her children, Stan Cropp and wife, Cathi, of Kansas City, Missouri, Leanne Hobbs and husband, Frank, of Tulsa, Cindy Riddle and husband, Bruce, of Wichita, Kansas, and Brenda Warner and husband, Tom, of Wichita, Kansas; two stepdaughters, Stacy Paris of Kiowa and Amanda Cropp of Kiowa; nine grandchildren, Rachel Cropp of Grand Junction, Colorado, Simon Cropp of Fort Collins, Colorado, Adam Cropp of Kansas City, Missouri, Sam Cropp and wife, Jennifer, of Pagosa Springs, Colorado, Ben Kraft and wife, Gail, of Tulsa, Abby Laughary and husband, Roger, of Wichita, Kansas, Zach Riddle and wife, Melissa, of Wichita, Kansas, Trey Warner of Nashville, Tennessee, and Dylan Warner of Wichita, Kansas; eight great grandchildren; many nieces and nephews, other relatives and friends. Memorial contributions may be made to the Kiowa Congregational Church.

Memorial services for Lyla Lee Cropp will be 10:30am Monday, February 8, 2021, at the Kiowa Congregational Church with Bud Ruggia officiating. Cremation arrangements are under the direction of Marshall Funeral Home of Alva. Lyla passed from... View Obituary & Service Information

The family of Lyla Lee Cropp created this Life Tributes page to make it easy to share your memories.

Memorial services for Lyla Lee Cropp will be 10:30am Monday,...

Send flowers to the Cropp family.