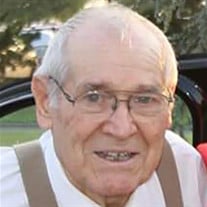 Funeral services for Mackey Vernon Payton will be 10:00 a.m. Wednesday, July 24, 2019, at the Marshall Funeral Home Chapel with Chuck Lightfoot officiating. Interment will be in the Alva Municipal Cemetery under the direction of Marshall Funeral Home of Alva. Mackey Vernon Payton, son of the late William and Caltha Jessetine (Hopkins) Payton, was born January 6, 1926 in Ringling, Oklahoma and passed away July 19, 2019, at Alva, Oklahoma, at the age of 93 years, 6 months, and 13 days. After Mack graduated from high school, he obtained his Bachelor’s Degree from Southwestern Oklahoma State University in education. He later returned to Southwestern and completed his Master’s Degree in Education. On April 30, 1949, he was united in marriage to Geraldine Francis Lethgo of Altus, Oklahoma. Mack also served in the Asiatic Pacific Campaign during World War II and was stationed in Japan. In 1960, Mack and Geraldine moved from Oklahoma to Petersburg, Texas where he pursed a career in teaching. He continued to teach math and science for the next 25 years and was very admired by his former students. In 1966 Mack and Geraldine moved his family to Lubbock, Texas where they raised their two young daughters. They were long time residents of Lubbock for the next 41 years. Mack moved to the Homestead and resided there since 2010. He enjoyed playing bingo and attending other functions with the residents there. After moving to the Homestead, Mack began to attend Bible studies with Chuck Lightfoot where he found his walk with Christ. Over the last few years, his faith grew and he was at great peace. He was a proud member of the Choctaw Nation. He loved tinkering with old cars and always looked forward to attending the Old Car Show in Alva. He enjoyed watching western movies and loved spending time playing with his grandchildren. He also enjoyed camping and fishing and often took his family on trips to the Colorado mountains. Besides his parents, he was preceded in death by his wife, Geraldine; and five brothers, Robert, Lonnie, Bill, Jody, and Louis Payton. Mack is survived by two daughters, Cynthia Self of Waynoka; and Janice Payton Hicks of Lubbock, Texas; one sister, Laverne Bailey of Temple, Texas; one sister, Laverne Bailey of Temple, Texas; two grandchildren, Jennifer Nicole Fuqua and husband, John Russell, of Waynoka, and Sydney Hicks of Boston, Massachusetts; three great grandchildren, John Colten Fuqua, Jace Hunter Fuqua, and Jorden Russell Fuqua, all of Waynoka; two nephews, David Payton of Austin, Texas, and Bill Payton and wife of Utah; one niece, Kim Payton of Utah; other relatives and friends. Memorial contributions may be to the First Presbyterian Church of Alva.

Funeral services for Mackey Vernon Payton will be 10:00 a.m. Wednesday, July 24, 2019, at the Marshall Funeral Home Chapel with Chuck Lightfoot officiating. Interment will be in the Alva Municipal Cemetery under the direction of Marshall Funeral... View Obituary & Service Information

The family of Mackey Vernon Payton created this Life Tributes page to make it easy to share your memories.

Send flowers to the Payton family.