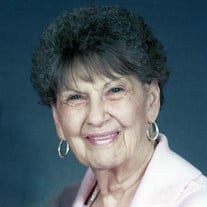 Marcella Joice Beach, daughter of the late Roy Means and Helyn Margaret (Robinson) Harris, was born October 12, 1924, in Sun City, Kansas, and passed away January 15, 2022, in Waynoka, Oklahoma, at the age of 97 years, 3 months, and 3 days. Marcella was cremated at her request and a memorial service will be held at a later date. Marcella attended several schools and graduated from Waynoka High School with the Class of 1943. She then moved to Wichita and worked at Boeing as a riveter on B29 bombers for use in World War II. On December 24, 1943, she was united in marriage to Lawrence Wilford “Sonny” Beach. They made their home in Waynoka where she was a homemaker. They enjoyed square dancing. Later in their marriage she was a cook for the school and then helped Sonny manage the Waynoka Housing Authority after his retirement from the railroad. Marcella was a member of the First Baptist Church in Waynoka since 1954. She was an avid painter and several of her works are displayed in the home. Besides her parents, she was preceded in death by her husband, L.W.; one brother, James Edwin Harris; and one sister, Wanda Ruth Edwards. Marcella is survived by one daughter, Christine Adele Keenan of Weatherford, Texas; two sons, Rex Alan Beach and wife, LaJoy, of Mooreland, and Kip Alan Beach of Waynoka; and one close friend of the family, Doug Ball, whom she considered one of her own. 4 grandchildren, Marc Simms and wife, Jennifer, of Superior, Wisconsin, Joshua Keenan and wife, Kristy, of Mansfield, Texas, Jaden Marker and wife, Anna, of Grafton, Wisconsin, and Jon Marker of Springfield, Missouri; 7 great grandchildren; 5 great great grandchildren; other relatives and friends. Memorial contributions may be made in her memory to your local church or favorite Christian ministry.

Marcella Joice Beach, daughter of the late Roy Means and Helyn Margaret (Robinson) Harris, was born October 12, 1924, in Sun City, Kansas, and passed away January 15, 2022, in Waynoka, Oklahoma, at the age of 97 years, 3 months, and 3 days.... View Obituary & Service Information

The family of Marcella Joice Beach created this Life Tributes page to make it easy to share your memories.

Send flowers to the Beach family.