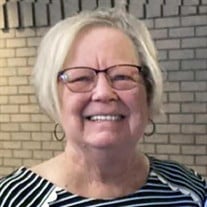 Memorial services for Marcia Dreiling will be 11:00 a.m., Wednesday, September 29, 2021, at the Zion Lutheran Church with Pastor Timothy Roggow officiating. Marcia Jean Dreiling, daughter of Norma Jean (Petermann) Lowe and the late William E. “Bill” Lowe, was born November 19, 1952, in Hardtner, Kansas, and passed away unexpectedly September 21, 2021, at her home in Alva, Oklahoma, at the age of 68 years, 10 months, and 2 days. Marcia grew up in the Alva area graduating from Alva High School in 1970. After graduation she moved to Holly, Colorado, where she met Stephan Dreiling and later married him on January 27, 1973. While in Colorado they had two children, Stephan Ryan and Stephanie Michelle. She later moved back to Alva with her children and attended Northwestern Oklahoma State University where she obtained a teaching degree. She worked in several different jobs around Alva, but she found her dream job as the children’s librarian at the Alva Public Library. She was a member of the Zion Lutheran Church. She enjoyed crafting, painting, and cross stitching. She loved going to craft shows and getting ideas and recreating things herself. She was very passionate about cooking for everyone and had an obsession with finding creative recipes. She had a knack for throwing ingredients together and creating what she called "Marcia's Magic". Marcia loved music and would often be found rocking out to her old albums with Ryan. She loved to take trips with friends and family and some of her favorite excursions were concerts with her kids, trips to the zoo with grandkids, and shopping sprees with her mom, her Aunt Helen, and Stephanie. The greatest loves of her life were her three grandchildren, Dalton, Dylen, and Krysten. She often commented that she would have skipped having kids and went straight to grandkids if that would have been a possibility. She loved to laugh and was always willing to laugh at herself first. She was preceded in death by her father, Bill Lowe. Marcia is survived by her children, Stephan Ryan Dreiling of Alva and Stephanie Marteney and husband, Scott, of Alva; her mother, Norma Jean Lowe of Holly, Colorado; her grandchildren, Dalton Marteney and Dylen Marteney, both of Alva, and Krysten Dreiling of Merkel, Texas; her brothers, Gary Lowe of Neosho, Missouri, and Randy Lowe and wife, Karla, of Alva; her sister, Denice Kennedy and husband, Benny, of Holly, Colorado; numerous nieces and nephews, other relatives, and friends. Memorial contributions may be made through the funeral home to the Zion Lutheran Church.

Memorial services for Marcia Dreiling will be 11:00 a.m., Wednesday,...

Send flowers to the Dreiling family.