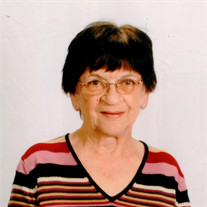 Maria “Inge” Morrison was peacefully called home on Sunday, December 29, 2019, at Seton Williamson Hospital in Round Rock, Texas, after suffering a major stroke 2 days prior. Inge was surrounded by her family at the time of her passing. Inge and her daughter, Diana, were visiting her son James and family in Taylor, Texas, to celebrate Christmas, New Year’s, and birthdays for granddaughter, Heather, and great granddaughter, Halle. Inge was born in Muhldorf Kreis Grunberg, Germany, on October 6, 1931, to Ernst and Anna Arndt. Inge’s early years in this part of Germany would soon be shaken. Russia and Hitler were at war for this area of Europe which is Poland today. Inge left home at the age of 18, leaving behind her family, to move to Frankfurt where she was a nanny for a U.S. Military family. She later ventured further west to Paris, France, where she was a nanny for another U.S. Military family. While in France, she met Jack Morrison SP3 US Army and they were married in Paris February of 1957, by both the French and United States. Inge gave birth to Rose Marie in May of 1957 in Paris. The day was Thursday, March 19, 1959, when a TWA plane from Frankfurt, Germany, arrived in Oklahoma City and Inge would start her new home in Dacoma, Oklahoma. Inge would give birth to a son, James, in May of 1959. Inge gave birth to daughter, Diana, in September of 1960. Inge and Diana would be together 24/7 for the remainder of her life. Inge gave birth to daughter, Lora Jane, in November of 1961. Inge and her family moved to Carmen in 1966. She worked at several jobs cleaning and then at The Carmen Home. Inge’s employment at The Carmen Home would span from April 4, 1970 to the year 2001. Inge’s 31 years of dedication to her positions of Certified Nurses Aide, followed by her Completion of Certification-Nurses Aide Medication Course, and then finally finishing up her employment in charge of Janitorial and Laundry Departments. She was dedicated to the care of the patients, nursing, and cleanliness of the rest home. Moms priority was providing for her children, a priority mom took very seriously and completed with grace. Inge had a strong faith in God and she was excellent, diligent, and meticulous in all her endeavors, especially her cleaning and paperwork. She was an excellent cook and loved to make potato salad, Rouladen and Red Cabbage (her German masterpiece), and finally her Christmas candy that so many enjoyed. She had patient recipients waiting from Carmen down to Austin, Texas, for her annual batch! She also loved to knit and crochet, making baby blankets for everyone’s babies. Inge definitely had a green thumb and had many beautiful potted plants in her home. One of the most special times Inge experienced was in the summer of 1976 when her mother, Anna, came to visit. Another occasion was when her brother, Siegfried, and a friend came from Germany to Carmen to visit. This would be the only time for Inge to see her mother and brother since leaving home. Inge leaves her son, James and Leisha Morrison, of Taylor, Texas, her daughters, Diana Morrison, who lived with Inge, and Lora Jane and Vince Sheik of Blanchard; six grandchildren, Chris May, Sam May, Heather Balusek, BJ Loney, Zachary Loney, and Krystle Hathaway; sixteen great grandchildren; sisters, Christel of Michigan, Ursula, Erika, and Waltraud, all of whom reside in Germany and haven’t seen Inge since she left home at 18; other relatives and friends; and also her beloved “Frankie”, the little Yorkie Terrier rescue from her and Diana’s trips to Texas. She picked his name after a Dachund she once cared for while a nanny back in Germany. Inge was preceded in death by her grandmother, Marie Kirchberg, her parents, Ernst and Anna, her brothers, Karl Heinz, Siegfried, and Helman; her daughter, Rosie; and her grandsons, Jackson May, Joshua Morrison, and Jesse May. A very special sincere “Thank You” for all that has been done for Inge and Diana over the years, helping with transportation needs (mom never had a drivers license), special friendships, and just being there for them. Forever grateful to Leslie and Harvey Curry, Nina Burkes, Polly Stanley, Shari Duel, and Jim B. “The Lawnmower Man” for all that you have done. In memory of our mother, Maria I. Morrison, and in honor of her daughter, Diana, memorial contributions may be sent to: Children’s Hospital Foundation, 901 N. Lincoln Blvd, Suite 305, Oklahoma City, OK 73104. Memorial graveside services for Inge Morrison will be, Thursday, 2:00 p.m. March 19, 2020, at the Carmen City Cemetery with Rev. Connie Kinnard officiating. Services are under the direction of Wentworth Mortuary, LLC.

Maria &#8220;Inge&#8221; Morrison was peacefully called home on Sunday, December 29, 2019, at Seton Williamson Hospital in Round Rock, Texas, after suffering a major stroke 2 days prior. Inge was surrounded by her family at the time of her passing.... View Obituary & Service Information

The family of Maria Ingeborg "Inge" Morrison created this Life Tributes page to make it easy to share your memories.

Send flowers to the Morrison family.