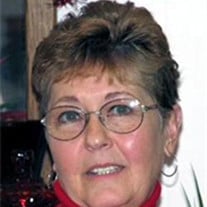 Memorial services for Martha Woolley will be 10:00 a.m., Tuesday, December 22, 2015, at the Alva Wesleyan Church with Pastor John Smith officiating. Cremation arrangements are under the direction of Marshall Funeral Home of Alva. Martha Lewis Woolley, daughter of the late Teddy Sturgeon and Verla Dean (Howell) Jones, was born May 9, 1944, at Waynoka, and passed away December 16, 2015, at Enid, at the age of 71 years, 7 months, and 7 days. Martha graduated from Waynoka High School. On November 28, 1964, she was united in marriage to Rick Woolley. She later went on to graduate from Northwestern Oklahoma State University in 1980 with a degree in business administration and accounting. She worked for Panhandle Eastern for several years, transferring to Lebanon, Tennessee, in 1989. She worked in the Nashville area until moving to Kansas for a few years before returning back to Alva in 1998. Shortly thereafter, she began working for Steve Knox, CPA, until her retirement in April of 2014. While working in Steve Knox’ office she enjoyed visiting with the clients. Martha thoroughly enjoyed her grandchildren and was so proud of each of them. She loved spending time with her family and savored the times when the family could get together and laugh and share, whether only a few or an entire housefull. One of her favorite hobbies was working in her yard. She loved plants and flowers. Many times she was requested to revive someone’s plant with her natural green thumb. Her dog, Junior, was just as much a part of her life as anyone or anything else. He was her trusty companion. Another hobby she enjoyed was shopping, especially for shoes. Besides her parents, Martha was preceded in death by a sister-in-law, Mary Jones. Martha is survived by one son, Donal Woolley and wife, Paula, of Waynoka; two daughters, Michelle Nally and husband, Rudy, of Pierceville, Kansas, and Melissa Harzman and husband, Lance, of Alva; one brother, Teddy Dean Jones; and good friend, Benny Valencia. Also surviving are grandchildren, Brittany Blackbird-Alvarado and fiancé, Cory, Dakota Blackbird-Alvarado, Mark Blackbird-Alvarado, Angela Littrell of Camp Lejeune, North Carolina, Dakota Littrell of Cimarron, Kansas, Dalton Littrell of Marine Corps Air Station, Yuma, Arizona, Sara Saddler and husband, Michael, of Chanute, Kansas, Jared Nally of Denver, Colorado, Kylee Harzman and Kinsey Harzman, both of Alva; great grandchildren, Smokie, Dreamie, and Talyn Cruz Grigat, Avain Xiexer, and Vynn Blackbird-Alvarado, Haven Littrell, and Brody and Hudson Saddler; several nieces, nephews, other relatives, and friends. Memorial contributions may be made through the funeral home to the Lymphoma Research Foundation.

The family of Martha Lewis Woolley created this Life Tributes page to make it easy to share your memories.