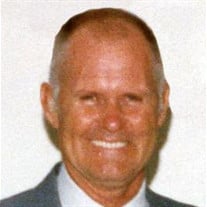 Memorial services for Marvin Guthrie will be 2:00 p.m. Saturday, January 4, 2020, at the First Baptist Church in Waynoka with Rev. Ken Hansen officiating. Arrangements are under the direction of Marshall Funeral Home of Waynoka, LLC. Marvin Thomas Guthrie, son of the late Reuben McKinley and Edna Violet (Root) Guthrie, was born April 12, 1930, at Woodward and passed away December 21, 2019, at Alva, at the age of 89 years, 8 months, and 9 days. Marvin grew up in Woodward, graduating high school in 1949. After graduation he attended a business school in Wichita Falls, Texas. On January 27, 1952, he was united in marriage to Wilma Jean Tomlinson at Woodward. He served in the United States Army during the Korean conflict from 1952-54. He completed his basic training at Ft. Sill, Oklahoma, and was later flown to Ft. Knox, Kentucky. Marvin was in Army Field Forces, driving tanks, testing new equipment and later serving as a Military Occupational Specialist working with military records. Marvin and Wilma moved from Woodward to Waynoka in 1964 where they raised their family. He was a member of the First Baptist Church and later attended the Assembly of God Church in Waynoka. He was the owner of Guthrie’s Conoco and later Guthrie’s Salvage. He was a Cub Master of the Cub Scouts and went on several mission trips with his church. He enjoyed spending time with his children, grandchildren, and great grandchildren, attending their many activities. Marvin was also known around town as the “Can Man.” Besides his parents, he was preceded in death by his wife, Wilma; three brothers, Floyd Guthrie, Larry Guthrie, and Charles Guthrie; and one sister, Margaret Merrell. Marvin is survived by his son, David Guthrie of Oberlin, Kansas; his daughter, Pam Davidson and husband, Don, of Waynoka; two grandchildren, Ricky Davidson and wife, Sallye, of Alva, and Cami Percival and husband, Trenton, of Hopeton; six great grandchildren, Chancie and Shelby Davidson, both of Alva, and Dalon, Trevon, Lexi, and Raydon Percival, all of Hopeton; other relatives and friends. Memorial contributions may be made through the funeral home to Beadles Nursing Home Activity Fund.

Memorial services for Marvin Guthrie will be 2:00 p.m. Saturday, January 4, 2020, at the First Baptist Church in Waynoka with Rev. Ken Hansen officiating. Arrangements are under the direction of Marshall Funeral Home of Waynoka, LLC. Marvin... View Obituary & Service Information

The family of Marvin Thomas Guthrie created this Life Tributes page to make it easy to share your memories.

Memorial services for Marvin Guthrie will be 2:00 p.m. Saturday,...

Send flowers to the Guthrie family.