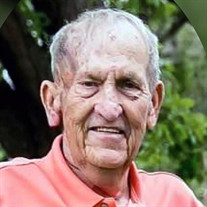 Memorial services for Marvin Ray Miller will be 2:30 p.m. Sunday, August 16, 2020, at the Waynoka School Multi-Purpose Building with Rev. Leon Veazey officiating. Services are under the direction of Marshall Funeral Home of Waynoka, LLC. The family recommends that masks be worn for the safety of everyone attending. Marvin Ray Miller, son of the late Walter Huey and Clara Hazel (Slater) Miller, was born November 11, 1943, in Caddo County, Oklahoma, and passed away surrounded by his family on August 9, 2020, at his home in Waynoka, Oklahoma, at the age of 76 years, 8 months, and 28 days. Marvin graduated from Waynoka High School, then earned his Bachelor’s Degree in Health and Physical Education from Northwestern Oklahoma State University. On August 6, 1966, he was united in marriage to Sally Jane Napier in Cedar Vale, Kansas. He taught school, driver’s education, and coached basketball in Oxford, Kansas, from 1966 until 1975. After his father passed away in 1975, Marvin and Sally returned to Waynoka where they helped run Miller’s Cafe, which served Waynoka for 57 years. Most of northwest Oklahoma has had a #7 overeasy cooked by Marvin, or maybe even got a quarter for the gum ball machine. After the closing of the café, Marvin operated C&M Hauling for several years where he delivered parts and supplies to many oilfield locations. In his retirement years, nothing gave him greater joy than spending the days with his family. Throughout his life, he could be found with loved ones close by whether that was in the field hunting, on the basketball court playing Horse, sneaking candy to his grand babies, or at his home beating everyone in Dominos. Marvin was the happiest when he was in a gym watching his kids and grandkids play basketball. He traveled many many miles and sat in numerous gyms throughout his lifetime (maybe even being thrown out of a few). We bet there isn’t very many gyms in Oklahoma that he hasn’t pulled up a chair at the score table to watch the game he loved. His favorite mode of transportation was his golf-cart. He would pull up to the door with a honk and his ornery grin, and his great grand babies jumped in with a giggle! He was very civic minded and served on the Waynoka School Board for many years and served as Mayor of Waynoka. He was also a retired member of the Waynoka Fire Department. He enjoyed hunting, raising bird dogs, and playing golf. He was an avid Oklahoma Sooner fan and enjoyed watching Cardinal Baseball. Marvin was baptized at his home just weeks prior to his death into the Waynoka First United Methodist Church. The majority of his Sundays were spent cooking eggs and pancakes, then getting the Sunday buffet ready to go. He may not have been on the front pew at church, but he lived every day helping others and living a life to be proud of. Besides his parents, he was preceded in death by his brother-in-law, Dan Parks. Marvin is survived by his wife, Sally, of the home; one daughter, Sherri Childers and husband, Paul of Waynoka; two sons, Brad Miller of Enid and Corey Miller and wife, Erica, of Enid; one sister, Juanita Parks of Derby, Kansas; and five brothers, Bill Miller and wife, Paula, of Mustang, Allen Miller and wife, LeaAnn of Waynoka, Larry Miller and wife, Cindy, of Woodward, Walt Miller and wife, Brenda, of Pampa, Texas; and Donnie Miller and wife, Jimmie, of Enid. Also surviving are seven grandchildren, Kourtney Webb and husband, Ryan, of Waynoka, Kolten Childers of Enid, MaKenzie Miller of Stillwater, Huston Lane, Avery Lane, and Nixon Lane, all of Enid, and Channing Miller of Enid; three great grandchildren, Karter, Keaton, and Lakyn Webb, all of Waynoka; numerous other relatives and many friends. In lieu of flowers, memorial contributions may be through the funeral home to the Waynoka Firefighters or the Fairview Regional Medical Center Nursing.

Memorial services for Marvin Ray Miller will be 2:30 p.m. Sunday, August 16, 2020, at the Waynoka School Multi-Purpose Building with Rev. Leon Veazey officiating. Services are under the direction of Marshall Funeral Home of Waynoka, LLC. The... View Obituary & Service Information

The family of Marvin Ray Miller created this Life Tributes page to make it easy to share your memories.

Memorial services for Marvin Ray Miller will be 2:30 p.m. Sunday,...