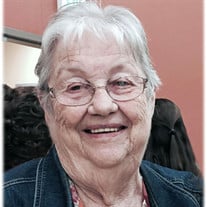 Funeral services for Mary Lou Decker will be 1:00 p.m. Tuesday, January 23, 2018, at the Quinlan United Methodist Church with Pastor Scott Ware and Rev. Thomas Corrigan officiating. Interment will be in the Mooreland Cemetery under the direction of Marshall Funeral Home of Waynoka. Mary Lou Decker, daughter of the late Noble Lewis and Anna Ruth (Parker) Willier, was born August 30, 1928, near Quinlan in Woodward County, Oklahoma, and passed away January 20, 2018, in Alva, Oklahoma, at the age of 89 years, 3 months, and 20 days. Mary Lou attended the Quinlan School and graduated out of the eighth grade. On January 8, 1944, she was united in marriage to Marvin Duane Decker at Woodward, Oklahoma. They made their home in Major County where they farmed and ranched. She also worked as a school bus driver and worked at the Waynoka Nursing Home. She was a member of the Quinlan United Methodist Church where she was active in the United Methodist Women. Besides her parents, she was preceded in death by her husband, Marvin; two children, Forrest Duane and Margaret Ann Decker. Mary Lou is survived by three children, Duane Decker and wife, Jeanie, of Waynoka, Judy Dannar of Alva, and Clay Decker and wife, April, of Alva; three siblings, Glen Willier and wife, Virginia, of Killeen, Texas, Jack Willier and wife, Rita, of Morocco, Indiana, and Peggy Fitzgerald of Hereford, Texas. Also surviving are 10 grandchildren, Roger Martin and wife, Edye, of Vici, Dale Martin and wife, Carla, of Pueblo, Colorado, David Martin of Waynoka, Donnie Martin and wife, Alona, of Omaha, Nebraska, Trisha Decker of Norman, Carolyn Smith and husband, Dan, of Pillager, Minnesota, Mary Gaskill and husband, Adam, of Waynoka, Rindy Dannar of Loveland, Colorado, Mark Dannar and wife, Julie, of Bethany, Missouri, and Amanda Decker of Alva 20 great grandchildren; 19 great great grandchildren; other relatives and friends. Memorial contributions may be made through the funeral home to the Kitchen Committee at the Quinlan United Methodist Church.

Funeral services for Mary Lou Decker will be 1:00 p.m. Tuesday, January 23, 2018, at the Quinlan United Methodist Church with Pastor Scott Ware and Rev. Thomas Corrigan officiating. Interment will be in the Mooreland Cemetery under the direction... View Obituary & Service Information

The family of Mary Lou Decker created this Life Tributes page to make it easy to share your memories.

Send flowers to the Decker family.