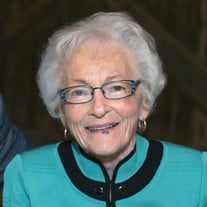 Memorial services for Mary Nell Holder will be held at 1:00 p.m. Monday, March 4, 2019, at the First United Methodist Church with Rev. Dr. Carol Cook Moore officiating. Interment will be prior to the service under the direction of Marshall Funeral Home of Alva. Mary Nell, only child of the late John Harrell and Jessie (Rodgers) Pyeatt, was born May 8, 1928, in Thomas, Oklahoma, and passed away February 27, 2019, in Alva, Oklahoma, at the age of 90 years, 9 months, and 19 days. Mary graduated from Thomas High School, then received her Bachelor’s Degree in Home Economics from Southwestern Oklahoma State University. On December 21, 1947, she was united in marriage to Jimmy Ray Holder in her parent’s home in Custer County, Oklahoma. After Jim graduated from Pharmacy School, they moved to Alva, where Jim began his professional career at Monfort’s. In 1952, they bought Hester Drug and began their business partnership when they opened as Holder Drug. Mary’s varied jobs at the drug store included buying, bookkeeping, makeup consulting, decorating, and waiting on customers. In 1955, they bought the residence at 811 College Avenue, where they lived till her passing. The large home gave housing, not only to the Holder family, but to several college women needing boarding as they attended the fast growing Northwestern Oklahoma State University. While she always enjoyed her time at the drug store, her true delight was making a home for Jim, Susie, Sally, and Todd. Her kitchen never closed and her table always welcomed one more. She was an active member of the First United Methodist Church, a member of the United Methodist Women, and a nearly 70 year member of the Fidelis Sunday School Class. She was also very active in her community, serving as a Girl Scout Leader, Rainbow Mother Advisor, and PTA member. She was a faithful participating member of PEO, Chapter AL, Eastern Star, American Legion Auxiliary, Holly Club, several bridge groups, and the Alva Golf and Country Club. Besides her parents, she was preceded in death by her husband, Jim, on February 8, 2017. Mary is survived by two daughters, Mary Susan Simpson and husband, Brownie, of Shawnee, Kansas, and Sally Eggleston and husband, Ken, of Waynoka and one son, Todd Holder of Alva; six grandchildren, Emily Freeman and husband, Chris, of Shawnee, Kansas, Amanda Fehr and husband, Scott, of Lenexa, Kansas, Heidi Claassen and husband, Jed, of Newton, Kansas, Sara Warnick and husband, Garret, of Blanchard, Oklahoma, Adam Holder and wife, Lacey, of Oklahoma City, and Andrew Holder and wife, Kirsten, of Oklahoma City; ten great grandchildren: Isaac and Megan Freeman, Emma, Henry and Hudson Fehr, Livie, Claire and Cade Claassen, Mackie Warnick, and James “Jimmy” Graham Holder; one nephew, Dr. Scott Poole and wife, Lisa, and their son, Sam; one niece, Rev. Kimberly Poole; and a town full of friends. Memorial contributions may be made through the funeral home to the Alva First United Methodist Church, the NWOSU Foundation for the Holder Family Scholarship, or Share Medical Center.

Memorial services for Mary Nell Holder will be held at 1:00 p.m. Monday, March 4, 2019, at the First United Methodist Church with Rev. Dr. Carol Cook Moore officiating. Interment will be prior to the service under the direction of Marshall... View Obituary & Service Information

The family of Mary Nell Holder created this Life Tributes page to make it easy to share your memories.

Memorial services for Mary Nell Holder will be held at 1:00 p.m....

Send flowers to the Holder family.