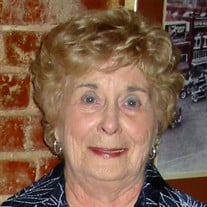 Graveside services for Mary Lou Eden-Farr will be 11:00 am, Thursday, January 12, 2017 at Fair Valley Cemetery, Freedom, Oklahoma, with Reverend Scott Ware and Reverend Woody Hamon officiating. Mary Lou will be in state at Ladusau-Evans Funeral Home from Tuesday, January 10, 2017 until noon on Wednesday, January 11, 2017, when she will move to Marshall Funeral Home of Alva, Oklahoma, where the family will receive friends from 5:00 pm until 7:00 pm. Burial will be in Fair Valley Cemetery. Funeral arrangements are under the direction of Ladusau-Evans Funeral Home. Mary Louise Wilson was born May 31, 1930, in Ft. Worth, Texas, and passed away, January 8, 2017, in Enid, Oklahoma. She was 86 years old. Mary Lou's childhood years were spent with her parents, Herbert R. and Lottie H. Wilson on their family farm southwest of Alva, Oklahoma. Her older brother Kenneth was away at college and on active military duty during many of those early years. She attended grade school at the North Eagle Country School for eight years and was very active in 4-H, as well as, being an inquisitive, hard-working and happy farm girl. While World War II was in progress, Mary Lou was a regular pen pal to several family friends and other soldiers serving in the war. During high school, Mary Lou stayed in town during the week with her Grandmother Elliott and attended Alva High School. She was an active teenager in Buggettes, Future Homemakers of America, MYF, Rainbows and held her first paying job at TG&Y. She always said that she really loved those times with her grandmother-they were special times. Mary Lou credits her Home Economics Teacher, Ms. Frizell for introducing her to life skills that enhanced her "creative side" throughout her life. After high school Mary Lou attended Nothwestern State College where she majored in business. As a college co-ed, she enjoyed making some new friends, attending her sorority meetings, giving piano lessons, going to dances ,as well as, attending other campus activities. On January 15, 1951, she married Darrel V. Eden in Alva, Oklahoma. They met while she was working at the Soil Conservation office in Alva. After their marriage they moved to the Eden Family Ranch near Freedom, Oklahoma. This is where they would make their home for forty-seven years, raise their four children and be given the "gift of grandchildren". Mr. Eden passed away on May 7, 1998. She continued to live on and operate the ranch near Freedom with her youngest son, Arly Eden, until 2004 when she would move to Alva. Mary Lou always thought her greatest achievement was her family. Her children have heard her say on countless occasions, and at different phases of their own lives "The only thing I really ever wanted was my own family". Being extremely proud of the fact that all four of her children were college graduates (some even hold graduate degrees) is an understatement. This was an expectation that she and Darrel always instilled in their children. While Mary Lou did enjoy her children, SHE REALLY ENJOYED BEING A GRANDMOTHER! Her children and family have always admired her hard work ethic, sense of style and creativity shown in her cooking, entertaining, sewing and design style, home decorating, etc. Her fabulous care-giving is matched by none. Her grandchildren relied on her for countless hours of baby-sitting and care-giving. If they were sick or hurt there is no one they would want to be with more than their own Mi Mi. During her years in the Freedom area she was very active in the community. She was a lifetime member of the American Legion Auxiliary where she served as President. She was also a member of the United Methodist Church , Freedom Chamber of Commerce, Flying Farmers Auxiliary, Woods Co. Cowbelles Association, Do Little Camping Club, a big supporter of the Freedom Ambulance and Fire Dept., promoted the Freedom Rodeo , plus many school and civic events. She and Darrel were owner/operaters of the Freedom Propane Co. for many decades. She started her own business, The Riverbed Antiques which she ran for many years. It was during the time that she was running the Riverbed Antiques, that she first met Elmer “Maurice” Farr. Their paths will cross again years later. On May 31, 2008, Mary Lou and Elmer “Maurice” Farr were married in a private ceremony by the Captain of a river boat in Tennessee. After an extensive honeymoon they made their home in Enid, Oklahoma. In addition to Elmer spoiling her, they really enjoyed their time in life together by focusing on their work, traveling to military events, vacationing, participating in community and civic events, and just celebrating day to day time together. Due to declining health for the last couple of years, they have made their home at The Commons Retirement Center in Enid, Oklahoma, where they continued to enjoy each other and their companionship. She was preceded in death by her parents, her husband Darrel, her bother Kenneth Wilson, and son-in-law Norman Benzel. Those left to miss her include her husband, Elmer Farr; children: Linda Feuerborn (Mike), Lisa Hartman (Scott), Rob Eden, Arly Eden (Jan); grandchildren: Guy Rackley, Matt Bixler and Jessica Sutton, Reagan Eden (Karen) and Natalie Adams (Brandon), Cooper Eden and Rebecca Eden. Great Grandchildren: Alyssa Rackley, Blayze Sutton and Matti Bixler, Rylan and Addison Eden, Kyler Holsten and Dylan Adams. Her brothers, Eldon Wilson and Bud Wilson plus several nieces and nephews, cousins, other relatives and many friends. Without question, her family loved her deeply- She will be missed. Memorials in Mary Lou’s name may be made to the Freedom Fire and Ambulance and the Freedom American Legion Women’s Auxiliary with Ladusau-Evans Funeral Home serving as custodian of the funds.

The family of Mary Lou Eden Farr created this Life Tributes page to make it easy to share your memories.

Graveside services for Mary Lou Eden-Farr will be 11:00 am, Thursday,...

Send flowers to the Farr family.