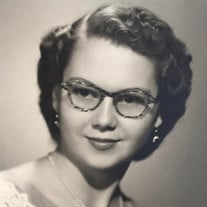 Mary Thilsted Koop passed away peacefully on November 16, 2019, in Norman, Oklahoma. A devoted Wife, Mother, Grammy, Aunt, Sister, and Friend, her generous and loving presence on this Earth will be missed. Mary was born on January 7, 1934, to Peter and Freda (Eckert) Thilsted in Hardtner, Kansas. The 8th of 9 Thilsted children, Mary grew up on the family farm in north Woods County where she milked cows, tended the garden, rode her favorite horse, Trixie, and shared the bonding experience of working hard from dawn to dark with her family. Mary graduated from Alva High School in 1951 and made the bold and brave decision to move to Wichita, Kansas, to work at the age of 17. Mary was so very grateful for her friends Violet and Helen, who were not only roommates but also dear mentors during her time living and working in Wichita. However, after only a couple of years, she returned to Alva when her father, Peter, passed away in order to be closer to her beloved mother, Freda. Mary enrolled in classes at Northwestern Oklahoma University and promptly met a dashing NWOSU football player, Benjamin Koop, and the two coeds fell in love. Mary and Ben were united in marriage on November 23, 1955, in Alva, Oklahoma, and remained inseparable for 61 wonderful years. Mary and Ben settled in Ponca City where Ben taught math and coached football at Ponca Military Academy while Mary worked at Continental Oil Company and finished her graduated degree at Oklahoma State University. Mary was encouraged by not only Ben but also her professors at OSU to become a teacher as she showed tremendous talent and an impeccable work ethic. Teaching was a most rewarding and fulfilling endeavor for Mary throughout her life with careers at Tonkawa, Blackwell, Putnam City, and Southwestern Oklahoma State University. As much as she loved teaching, Mary wanted to be a mother above all else. After losing not one but two infant daughters in death, Mary and Ben went through the arduous process of adoption. Their daughter, Marilyn, was adopted first and then their son, Stan, was welcomed into the family the following year. In 1973, Mary and Ben purchased their first farm in western Oklahoma. Farming and teaching became the ultimate labor of love. Mary and Ben eventually expanded their farming operations in Custer, Major, and Woods Counties. In addition to working the fields and the cattle, Mary always made delicious meals for her family. Everyone still marvels to how she ever did all that she did in this life. Between teaching, farming, and raising children, Mary was always the person to be counted on to help and assist in times of need. Always there to care for others, she perpetually sacrificed herself for the betterment of those she loved. In 1980, Mary and Ben moved their family to Weatherford where they remained for 28 years. After Ben suffered two massive strokes in 2006, Mary was his caregiver and never left his side until his passing in 2016 and now they are finally, joyfully reunited. Survivors of Mary include her daughter Marilyn Koop Grammer and husband, Zeke, Yarbrough, grandchildren Helen, Xander, and Rose; son, Stan Koop and wife, Kim Koop, grandchildren Ben, Grace, and Carly. Mary is also survived by her sister Christie Thilsted Beadles of Santa Fe, New Mexico, and sister-in-law Rosy Thilsted as well as many beloved nieces and nephews including Mary Marie Hamilton, Debbie Moeker, Tony Beadles and Teri Butler. Mary is preceded in death by her sweetie and husband of 61 years, Ben Koop and her two daughters, Cindy and Melinda Koop; her parents, Peter Thilsted and Freda Eckert Thilsted; brothers Walt, John, Martin, James, and Bobby; and sisters, Marie and Maxine. The Koop Family invites everyone who’s life has been touched by Mary to join them in honoring and celebrating the life of this remarkable woman Friday, November 22, 2019, at 10:30 a.m. at the Marshall Funeral Home Chapel in Alva, Oklahoma. In keeping with the wishes and spirit of Mary, everyone attending her Celebration of Life is invited to a feast immediately after the service in the Fellowship Hall at the First United Methodist Church in Alva.

Mary Thilsted Koop passed away peacefully on November 16, 2019, in Norman, Oklahoma. A devoted Wife, Mother, Grammy, Aunt, Sister, and Friend, her generous and loving presence on this Earth will be missed. Mary was born on January 7, 1934,... View Obituary & Service Information

The family of Mary Alice Thilsted Koop created this Life Tributes page to make it easy to share your memories.