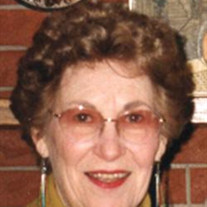 Mary Helen (Presnall) Wilson was born January 25, 1924, in Woods County, Oklahoma, to Maude (Muncie) and Howard Presnall and died November 4, 2012, in Alva, Oklahoma. She graduated from Carmen High School and attended NWOSU, receiving her B.A. and Master of Teaching degrees there. She pursued additional graduate study at the University of Colorado, North Texas State University, and a summer institute in Athens, Greece. On January 5, 1945, she was married to Ensign Harold W. Wilson at Carmen, Oklahoma. To this union two children were born?a daughter, Judy, and a son, Robert. Mrs. Wilson taught English at NWOSU for thirty-two years, retiring in 1987. She was a member of Delta Kappa Gamma, member and past President of Chapter C-PEO, Holly Club, and Delta Zeta Sorority. She was a member of the First United Methodist Church and a charter member of the Fidelis Sunday School Class, in recent years having been the class teacher. A special interest for the past ten years was her participation in Friends of the Alva Library and its related book discussion groups. She was preceded in death by her parents, her husband, three brothers, Dale, Bob, and Max, a sister, Virginia Kelley, and her daughter-in-law, Marlene Wilson. She is survived by her daughter, Judy Kirk of Enid, Oklahoma; her son, Bob Wilson of Garden City, Kansas; three grandchildren, Melissa Wilson of San Francisco, California, Scott Wilson of Seattle, Washington, and Jill Kirk of Tulsa, Oklahoma; one sister, Polly Baker of Leesville, South Carolina; and four sisters-in-law, Jean Schwerdtfeger of Capron, Oklahoma, Audrey Presnall of Alva, Oklahoma, Vera Wilson of Escondido, California, and Elsie Nixon of California. Memorial contributions may be made through the funeral home to First United Methodist Church.

The family of Mary Helen Wilson created this Life Tributes page to make it easy to share your memories.