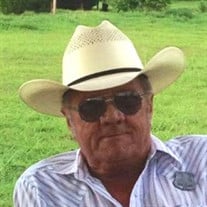 Max Glenn Devine, son of the late Glenn Wilford and Bessie Idel (Carson) Devine, was born June 28, 1944, at Alva, Oklahoma, and passed away July 28, 2016, at his home in Woods County, Oklahoma, at the age of 72 years and 1 month. He was cremated at his request and no services are planned. Max attended Rosevalley School and graduated from Waynoka High School. He served in the 4th Bn, 14th Artillery in the United States Army. On August 17, 1972, he was united in marriage to Yvonne Gardner at Canadian, Texas. They made their home on the ranch north of Waynoka where he farmed and ranched all of his life. He also worked for the Santa Fe Railroad, as an oil field pumper, and for Woods County. He enjoyed hunting, fishing and harassing friends and family. Besides his parents, he is preceded in death by an infant son, Max Devine, Jr.; an infant brother, Gary Lee Devine, and a granddaughter, Courtney Overcashier. Max is survived by his wife, Yvonne, of Waynoka; six children, Bridget Dean and husband, Rusty, of Waynoka, Sandy Adams and husband, Chris, of Arkansas City, Kansas, Lanna Slater and husband, Fred, of Cleo Springs, Shane Devine and wife, Tammy, of Waynoka, Justin Clark and wife, Patricia of Georgetown, Texas, and Lisa Higgins and husband, Brad, of Waynoka. Also surviving are 17 grandchildren, Kayla Turner and husband, Austin, of Alva, Daniel Unruh and wife, Elli, of Manhattan, Kansas, Dustin Unruh of Forgan, Bill Higgins of Alva, Bobby Dean of Arkansas City, Kansas, James Dean of Waynoka, Dallas Adams of Arkansas City, Kansas, Brandi Adams of Arkansas City, Kansas, Corey Adams of Ponca City, Skylar Adams of Arkansas City, Kansas, Cody Slater of Enid, Hunter Slater of Cleo Springs, Cari Lesko and husband, Justin, of Waynoka, Billy Devine of Waynoka, Caydence Devine of Waynoka, Steven Reese and wife, Trisha, of Cherokee, and Dawson Fulbright of Woodward; 10 great grandchildren; other relatives and friends. Memorial contributions may be made through the funeral home to the State Game Warden Association Youth Camp.

Max Glenn Devine, son of the late Glenn Wilford and Bessie Idel (Carson) Devine, was born June 28, 1944, at Alva, Oklahoma, and passed away July 28, 2016, at his home in Woods County, Oklahoma, at the age of 72 years and 1 month. He was cremated... View Obituary & Service Information

The family of Max Glenn Devine created this Life Tributes page to make it easy to share your memories.

Send flowers to the Devine family.