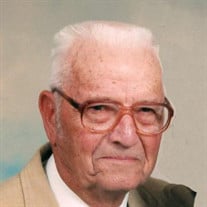 Graveside services for Melvin “Tubby” Brooks will be 11:00 a.m., Friday, September 7, 2018, at the Carmen City Cemetery. Arrangements are under the direction of Marshall Funeral Home of Alva. Melvin Lee “Tubby” Brooks, son of the late Joseph Orval and Jennie Marie (Jenlink) Brooks, was born November 7, 1915, at the family homestead south of Cherokee, Alfalfa County, Oklahoma, and passed away September 4, 2018, at Alva, Oklahoma, just a few months shy of his 103rd birthday. Tubby began school at Prairie Valley and then Cherokee schools before graduating from Carmen High School with the class of 1936. He was united in marriage to Bonadine Etta Hall on January 27, 1937, in Fairview. They made their home in Carmen where they raised their family. Tubby has lived the last nine years in Alva. He was a member of the Carmen Christian Church where he served on the church board. Tubby was also a member of the Carmen Oddfellow Lodge, on the school board, city council, and a volunteer fireman. Besides his parents, he was preceded in death by his wife, Bonnie; his infant son, Melvin Jr.; his daughter, Josetta Wallace; and his sister, Lois Mott. Tubby is survived by his son, Terrence Patrick Brooks and his wife, Dawn Gay, of Alva; three grandchildren, Brooke Hess and her husband, Roger, of Enid, Troy Brooks and his wife, Li, of Alva, and Bryan Brooks of Alva; three great grandchildren, Jessica Zahorsky and her husband, James, of Enid, Ko Brooks, and Torin Brooks, both of Alva; other relatives and friends. Memorial contributions may be made through the funeral home to the Carmen Fire and Rescue or the Carmen Christian Church.

The family of Melvin Lee "Tubby" Brooks created this Life Tributes page to make it easy to share your memories.

Send flowers to the Brooks family.