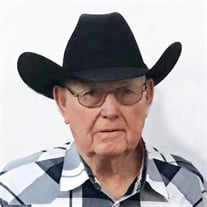 Funeral services for Merlin Dee Overton will be 2:00 p.m. Tuesday, September 8, 2020, at the Alva First Christian Church (Disciples of Christ) with Rev. Ron Pingelton and Pastor Drew Kirtley officiating. Interment will be in the Alva Municipal Cemetery under the direction of Marshall Funeral Home of Alva, Oklahoma. Merlin, son of the late Earl and Lillian (McCormick) Overton, was born May 17, 1941, in Nash, Oklahoma, and passed away September 3, 2020, in Alva at the age of 79 years. After graduating from Nash High School, he attended Northwestern Oklahoma State University where he obtained his degree in Health and Physical Education with a minor in History. On October 1, 1960, he married his high school sweetheart Linda Clo Grayson in Hawley, Oklahoma. Merlin taught and coached in the Alva School system for 12 years. He then obtained his Master of Education Administration from Oklahoma State University. He was a private business owner for four years prior to coaching and teaching in the Cherokee School System. He later became Superintendent of Schools in Cherokee, and also served as the Superintendent for Cimarron School in Lahoma. After his retirement, he and Linda returned to Alva. He loved spending time with his grandkids, teaching them the ways of the world and sharing his passion for the outdoors. Merlin was an avid golfer and hunter and loved being around and tending his horses. He was a counselor and mentor to many. A man of multiple talents, he was an accomplished pilot and flight instructor and served the town as a locksmith. Besides his parents, he was preceded in death by one sister, Reta Mae Overton. Merlin is survived by his wife, Linda, of Alva; two daughters, Tracy Middleton and husband, Donald, of Peoria, Arizona, and Shawna Cayot and husband, Jeffery, of Alva; and two siblings, Earl Overton and wife, Ilus, of Enid; Lavay Moore and husband, Robert, of Nash; and one brother-in-law, Jim Overton of Yuba City, California. He is also survived by seven grandchildren, SGT Donny Middleton and wife, Hartsena, of Ft. Bragg, North Carolina, Makenzie Middleton of Scottsdale, Arizona, Kathryn Middleton of Phoenix, Arizona, and Christopher Middleton of Peoria, Arizona; Shawn Green, of Alva, Breauna Overton of Guthrie, and Triston Cayot of Alva; six great grandchildren, Pryce, Ralston, Landon, Deon, Dalton and Tinsley; other relatives and many friends. Memorial contributions may be made through the funeral home to the Alva Educational Foundation (checks must be made payable to CFO) or the Alva First Christian Church.

Funeral services for Merlin Dee Overton will be 2:00 p.m. Tuesday, September 8, 2020, at the Alva First Christian Church (Disciples of Christ) with Rev. Ron Pingelton and Pastor Drew Kirtley officiating. Interment will be in the Alva Municipal... View Obituary & Service Information

The family of Merlin Dee Overton created this Life Tributes page to make it easy to share your memories.

Funeral services for Merlin Dee Overton will be 2:00 p.m. Tuesday,...

Send flowers to the Overton family.