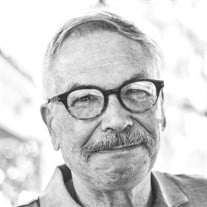 MICHAEL BRUCE HUFFORD Michael Bruce Hufford passed away, Friday, November 22, 2019, at his home in Waynoka, Oklahoma. Mike was born in Waynoka, Oklahoma on December 14, 1955, to Arbon and Doris Hufford. He graduated from Waynoka High School in 1974 and attended Northwestern University in Alva before moving to Stillwater in 1975 to pursue music with his band, Moses. Mike had a very successful career producing, recording and playing music, as well as running sound for various acclaimed artists. Mike was an audio engineer and sound specialist for Stillwater Designs and Audio, now Stillwater Designs KICKER, from 1979 until 1988. Mike also owned and operated Lamb Recordings from 1975 until 1991. He recorded and produced many albums and demos for artists who went on to enjoy their own successes. In addition, Mike was a very talented drummer who played for numerous bands, both live and in studio. Mike provided sound for various well-known artists. He also ran sound for the Oklahoma State University Athletic Department and was involved with many projects at what was then, Gallagher Hall. He was the first to provide pregame music for OSU football games, in what was at that time, known as Lewis Stadium. For many years Mike worked for Oklahoma State University Physical Plant. His favorite past-times were collecting vintage recording equipment, restoring Cushman motorcycles, and building model aircraft. He belonged to Sunnybrook Christian Church, where he was baptized in June of 1988. Mike was preceded in death by his father, Arbon Hufford and brother, Colin Hufford. Mike is survived by his mother, Doris Edwards and husband Ron, Waynoka, OK; son, Nathan Hufford, Nashville, TN; daughter, Abbey Watkins and husband Paul, Nashville, TN; nephew Casey Hufford, Waynoka, Ok; niece, Nicole Clowers, Edmond, OK; two grandsons, Paul Augustus and Pate Andrew Watkins, Nashville, TN. Memorial services will be held November 29th at 10:00 a.m. at the Waynoka First Baptist Church under the direction of Marshal Funerall Home, 230 Flynn St, Alva, OK 73717. Remembrances may be shared with the family at www.marshallfuneralhomes.com.

The family of Michael Bruce Hufford created this Life Tributes page to make it easy to share your memories.

Send flowers to the Hufford family.