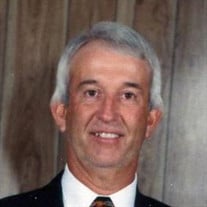 Memorial services for Michael Meek will be 10:00 a.m. Friday, April 20, 2018, at the United Methodist Church in Mooreland with Pastor Larry Masoner officiating. Cremation arrangements are under the direction of Marshall Funeral Home of Waynoka. Michael Gene Meek, son of the late LeRoy and Violet (Thornhill) Meek, was born August 23, 1948, at Mooreland, Oklahoma, and passed away suddenly at his home south of Waynoka, April 16, 2018, at the age of 69 years, 7 months, and 23 days. Mike attended school at Waynoka where he graduated in 1966. He attended Northwestern Oklahoma University and played in the band. After a few years working in Colorado, Mike joined the Army and did his basic training at Fort Polk, Lousiana. He was honorably discharged in 1972 and came back home to the family farm near Waynoka to help his family raise hogs. Mike loved working with livestock and had many fond memories of helping his nieces, Amy and Amanda, with their FFA show hogs and lambs. Throughout his life, he loved high school sports. He was passionate about watching all his nieces and nephews play all the different sports they were involved in. That passion continued on to his great nieces and great nephews as well. Mike was a longtime bachelor, but married the love of his life, Lee Ann Matteson Stine on May 24, 1997. They made their home south of Waynoka on the family farm. With marriage he also acquired a daughter, Neta Marie Stine Copenhaver and son-in-law, John Edward Copenhaver and a son, John Charles Stine II. The extra special bonus with his marriage was having four grandsons, Dakota John Copenhaver, Dallett John Copenhaver, John Charles Stine III, and Hunter Isaac Stine. He was so proud of all of them and enjoyed watching them grow up attending all of their activities. Mike and Lee Ann were longtime OU fans and could not wait until the next OU football season started. They were both members of the OU Touchdown Club and the OU Sooner Club where they made many life long friends. Mike was an avid rattlesnake hunter. His brother, Pat Meek, friend, Lyman Redgate, and he hunted snakes in the redhills of home and in south Texas where he made many friends. They won several snake hunts at Waynoka, Apache, Mangum, Waurika, and Okeene, having won the Waynoka Snake Hunt 12 years in a row. Their official longest snake measured 88", although the guys tell of a longer miss measured one. Mike was employed by Woods County for 11 years. He drove a rock truck and operated heavy equipment. Mike retired in 2007. Besides his parents, LeRoy and Violet, he was preceded in death by one brother, LeRoy Dale Meek. Mike is survived by his wife, Lee Ann of Waynoka; stepdaughter, Neta Copenhaver and husband, John, of Waynoka; stepson, John Stine II of Waynoka; grandsons, Dakota Copenhaver, John Stine III, Dallett Copenhaver, and Hunter Stine all of Waynoka; two brothers, Terry Meek and wife, Judy, of Waynoka, and Pat Meek and wife, Jeanita, of Enid; two sisters, Sonya Cummins of Enid and Sandra Dickens and husband, Lyle, of Greely, Colorado; mother-in-law, Joyce Matteson of Mooreland; and father-in-law, Wesley Matteson of Mooreland; a host of nieces, nephews, other relatives and a multitude of friends. Memorial contribution may be made through the funeral home to the Mike Meek Memorial Scholarship (please make checks payable to Lee Ann Meek, memo Scholarship).

Memorial services for Michael Meek will be 10:00 a.m. Friday, April 20, 2018, at the United Methodist Church in Mooreland with Pastor Larry Masoner officiating. Cremation arrangements are under the direction of Marshall Funeral Home of Waynoka. Michael... View Obituary & Service Information

The family of Michael Gene Meek created this Life Tributes page to make it easy to share your memories.

Send flowers to the Meek family.