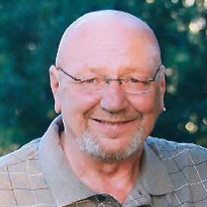 Memorial Services for Mickey Louis Stallings will be at 1pm on Monday, August 6, 2018, at Marshall Funeral Home in Alva with Rev. Lawrence Gresham officiating. Inurnment will be at the Alva Cemetery under the direction of Marshall Funeral Home of Alva. There will be a reception at the First Baptist Church following the inurnment. Mickey Louis Stallings, son of Louis Stallings and Dorthy Stallings, was born on February 24, 1949 in Alva, OK and passed away on July 30, 2018, in Oklahoma City, OK at the age of 69. Mickey Graduated from Alva High School in 1967; he then joined the Air Force, receiving the National Defense Service Medal, Vietnam Service Medal, Vietnam Campaign Metal and Air Force Outstanding Unit Award. Mickey completed his Master’s Degree in Business and retired from Northern Oklahoma Resource Center of Enid in 2008. He was preceded in death by his father, Louis Stallings on January 26, 1993 and sister, Deborah Schwerdtfeger on September 9, 2010. Mickey was survived by his mother, Dorthy Stallings, brother Phil Stallings and his wife Clare, his two sons, Phillip Stallings and his wife Brandy, Jason Stallings and his wife Michelle; five grandchildren, Jazmine, Alex, Shy-anne, Amelia and Andrew; two nephews, Curtis Diel and Kyle Arnold and niece Michelle Wiles. Mickey loved spending time with his family; he enjoyed gathering together and cooking for all of his family and extended family throughout the years. Mickey’s grandkids were extremely close to his heart and he was so proud of each of them, they could bring a smile to his face in even the worst of times. Mickey enjoyed classic rock and attending concerts. He also enjoyed traveling with his brother, they loved watching their grandkids and nephews play sports and shared a love for baseball. Memorial contributions may be made through the funeral home to Vietnam Veterans of America (VVA).

The family of Mickey Louis Stallings created this Life Tributes page to make it easy to share your memories.

Memorial Services for Mickey Louis Stallings will be at 1pm on...

Send flowers to the Stallings family.