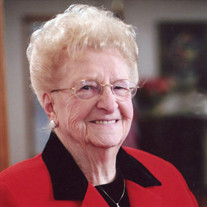 Funeral services for Mildred Paris Johnson will be 2:00 p.m. Thursday, December 28, 2018, at the Alva First United Methodist Church with Pastor Carol Cook Moore and Ray Paris officiating. Interment will be in the Alva Municipal Cemetery under the direction of Marshall Funeral Home of Alva. Mildred Johnson, daughter of the late Roy O. and Icis I. (Bonner) Wert, was born July 6, 1917, on the farm in Woods County, Oklahoma, and passed away December 22, 2017, at Enid, Oklahoma, at the age of 100 years, 5 months, and 16 days. Mildred graduated from Alva High School with the Class of 1934, then attended Northwestern State College. In 1939 she was united in marriage to Ralph Volney Paris. They made their home on the farm north of Dacoma. She was a cook at Dacoma School for a time. She and Ralph loved all forms of dancing, but really enjoyed Square Dancing. Ralph preceded her in death on April 30, 1966. In 1980 she was united in marriage to Harry Johnson in Medicine Lodge, Kansas. They also loved dancing, but they participated in Ballroom Dancing. He preceded her in death on July 4, 1995. Mildred was a member of the Alva First United Methodist Church, where she was involved in the Mary Martha Circle. She was also a member of the Red Hat Society and Home Demonstration where she served as treasurer. She worked on the election board in both Dacoma and Alva. Mildred is survived by her children, Joan Morse and husband, Wayne, of Enid, and Ray Paris and wife, Donna, of Portland, Oregon; 5 grandchildren Kathy and Joe Pearson of Buffalo, Mike and Donna Morse of Tulsa, Colleen and David Epler of Wichita Falls, Texas, Chris and Jeanne Modderman of Portland, 0regon, and Sam and Kristina Paris of Portland; 10 great grandchildren; Katlin and Bailee Pearson, Christine and Molly Morse, Zyler, J.T., Anna, and Emily Modderman, Isabella and Olivia Paris; other relatives and many friends. Memorial contributions may be made through the funeral home to the Wesley Foundation of Alva.

Funeral services for Mildred Paris Johnson will be 2:00 p.m. Thursday, December 28, 2018, at the Alva First United Methodist Church with Pastor Carol Cook Moore and Ray Paris officiating. Interment will be in the Alva Municipal Cemetery under... View Obituary & Service Information

The family of Mildred Johnson created this Life Tributes page to make it easy to share your memories.

Funeral services for Mildred Paris Johnson will be 2:00 p.m....

Send flowers to the Johnson family.