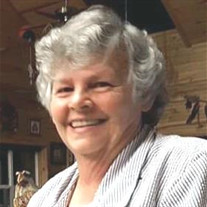 Funeral services for Millie Rader will be 10:30 a.m., Saturday, October 19, 2019, at the Freedom Christian Church with pastor Mark Kinkel officiating. Interment will be at 2:00 p.m. at the Pleasant Ridge Cemetery at Aline under the direction of Marshall Funeral Home of Alva. Mildred Faye, daughter of the late Orval J. and Fern Ethel (Salladay) Ent, was born November 22, 1944, at Watonga, Oklahoma, and passed away October 14, 2019, at her home west of Alva at the age of 74 years, 10 months, and 22 days. Her father died when she was young and her mother remarried John Beckwith, who she called “Daddy”. Millie grew up and attended school in Cleo Springs, graduating with the Class of ‘62. She was united in marriage to Billy E. Lawrence and they had three children: Connie, Becky, and Ricky. She was later married to Ernest Rader on April 6, 1991, at the Rader Ranch. Before moving to the ranch, she lived in Cleo Springs and Enid. She was a member of the Elm Flat Christian Church and later was a devoted member of the Freedom Christian Church. She enjoyed sewing, cooking, jewelry making, all kinds of crafts, fishing, traveling, and most of all, spending time with her kids and grandkids. Millie also was a wonderful cake decorator, making cakes for each of her many family members. Besides her parents, she was preceded in death by three brothers, Walter Ent, Harold Ent, and Howard Ent; an infant brother; and one great grandchild, Easton Campbell. Millie is survived by her husband, Ernie, of the home; six children, Connie Lawrence of Waukomis, Becky Lawrence of Enid, Rick Lawrence and wife, Kara, of Falcon, Colorado, Vaughn Rader and wife, Kim, of Alva, Darrin Rader and wife, Michelle, of Orlando, Oklahoma, and Dale Rader of Columbia Falls, Montana; three sisters, Virginia Jones of Enid, Dixie Beckwith and husband, Wendell, of Cleo Springs, and Anna Galusha of Enid. Also surviving are eleven grandchildren, Tyler Lawrence and wife, Misty, of Cleo Springs, Lacy Campbell and husband, Jason, of Waukomis, Kimberly Wedel and husband, Damien, of Enid, Devin Coffey of Enid, Colton Lawrence and wife, Emily, of Falcon, Colorado, Zachary Lawrence of Falcon, Colorado, Bella Lawrence of Falcon, Colorado, Mitchell Rader and wife, Hayden, of Alva, Logan Rader of Oklahoma City, Riley Rader of Mustang, and Raegan Tune and husband, Matt, of Mooreland; seven great grandchildren, Brayden Lawrence, Landyn Coffey, Carson Campbell, Jaxon Wedel, Abel Wedel, Sophie Wedel, and Traden Tune; other relatives and many friends. Memorial contributions may be made through the funeral home to the Freedom Christian Church or the Capron United Methodist Church.

Funeral services for Millie Rader will be 10:30 a.m., Saturday, October 19, 2019, at the Freedom Christian Church with pastor Mark Kinkel officiating. Interment will be at 2:00 p.m. at the Pleasant Ridge Cemetery at Aline under the direction... View Obituary & Service Information

The family of Mildred "Millie" Rader created this Life Tributes page to make it easy to share your memories.

Send flowers to the Rader family.