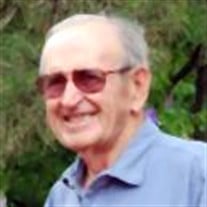 Private family memorial services for Dr. Milton Willis Lehr will be at the United Methodist Church with Rev. Dr. Carol Cook Moore officiating. Milt was cremated at his request under the direction of Marshall Funeral Home of Alva. Dr. Milton Willis Lehr, the fifth of seven children born to Carl and Tena Lehr, was born October 27, 1924, at Okeene, Oklahoma, and passed away June 12, 2016, at Alva, Oklahoma, at the age of 91 years, 7 months, and 16 days. Milt graduated from Okeene High School with the Class of 1942. At the age of eighteen he ran away from home to Connors Junior College in Warner, Oklahoma, with twenty-eight dollars, a suitcase, and the dream of bettering himself. After a few months, he transferred to Northwestern State College in Alva, Oklahoma. In 1943, Milt was drafted and served twenty-six months during World War II in the United States Navy as an aviation radioman and as a cadet in the Navy Air Force. After his service, Milt returned to Northwestern State College where he was a varsity basketball player for the Rangers. He completed his undergraduate degree in 1949, with majors in mathematics and history. He received a Master of Education degree in 1952 from Phillips University in Enid, Oklahoma. He continued his education at the University of Oklahoma where he received his Doctor of Education degree in 1956. He also completed post-doctoral work at the University of Minnesota. On August 4, 1947, Milt married Rebecca Jane Tyree. Together they had three children: Melissa, Steven, and Tena. Milt’s life was dedicated to the field of public education, including seven years as a junior and senior high school instructor in Alva Public Schools, several months in the instructor training department in the United States Navy, twenty-eight years as a teacher and administrator of the teacher education program at Northwestern Oklahoma State University, two years as executive director of the first Oklahoma Education Council, and educational consultant to former Governor David Boren. Milt also helped organize and secure the passage of two constitutional amendments to the Oklahoma Constitution which removed certain discriminatory and racial terms related to African Americans. He also served as consultant to Senator Jim Howell, one of the principal authors of the historical House Bill 1017. He additionally serviced as commissioner of the Oklahoma Wildlife Commission. In 2000-2001, Milt and Becky restored and furnished a century old one room schoolhouse located in Woods County. The building was moved to the NWOSU campus near the education center where it is used today by teacher education classes, public schools, and a variety of groups and organizations. In 2002, the Lehrs were recognized for the efforts by the Oklahoma Heritage Association, which awarded them the “Distinguished Service Award for Preservation of State and Local History.” Milt and Becky also spent several years restoring a railroad section house, as well as a scale house which were moved to the Waynoka Railroad Museum complex in Waynoka, Oklahoma. Milt’s various accomplishments included his service for ten years as a scoutmaster of Boy Scouts of America, Alva Troop 392. He also served as President of the Oklahoma Teacher Education and Professional Standards Commission, President of the Oklahoma Conference of AAUP, and President of the Northwestern Alumni Association. He was twice selected to appear in the Dictionary of International Autobiography and the Who’s Who in American Politics Yearbook to name only a few of his accomplishments. He was also inducted into the Oklahoma Educators Hall of Fame in 2003. Milt’s many interests and hobbies included historical preservation, woodworking, bowling, fishing, politics, ranching, travel, gardening, reading, writing, and playing hundreds of ping pong games with his grandchildren. Besides his parents, he was preceded in death by five siblings, Ralph Lehr, Ernie Lehr, Ray Lehr, Gene Lehr, and Alma Gerkin. Milt is survived by his wife of sixty-eight years, Rebecca Jane of Alva, three children, Melissa Godfrey and husband, Stephen of Harper, Kansas, Steven Lehr and wife, Sheila, of Alva, and Tena Floeter of Edmond, Oklahoma; one sister, Willadean Hendricks of Okeene, Oklahoma, seven grandsons; nine great grandchildren; other relatives and friends. A university colleague once jokingly said that he believed Milt would try to move an ant den if he thought it would be an improvement. May Milt’s spirit find as much joy in its journey as he found in life. Memorial contributions may be made through the funeral home to the Oklahoma Foundation for Excellence.

The family of Milt Lehr created this Life Tributes page to make it easy to share your memories.

Send flowers to the Lehr family.