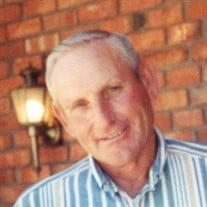 Graveside services for Monty Shelite will be 1:00 p.m. Saturday, November 14, 2020, at the Aline Star Cemetery, with Rev. Dave Jenkins officiating. Interment is under the direction of Wentworth Mortuary, LLC, of Carmen. Monty Ray Shelite, 3rd son of Eugene “Gene” Vance and Dorothy Leora (Knox) Shelite, was born December 8, 1939, at Alva, Oklahoma, and passed away November 6, 2020, at his home surrounded by family, at the age of 80 years, 10 months, 28 days. Monty was raised 10 miles west of Aline in Prime Sandy Loam where watermelons and cantaloupe were grown to be eaten by all. The family began growing melons when Monty was a teenager. His family identified the best watermelon and cantaloupe seeds and were best known for producing Black Diamond melons that weighed over 50 lbs. Shelite melons were shipped to North Dakota, Colorado, New Mexico, Arkansas, Texas, and Kansas. His mom and dad had a regular route that included Alva, Enid, and Woodward and when they could no longer drive the route themselves, other family members took over. Garry, Larry and his wife Earlene drove many miles to help with melons. Many of the local school kids, teachers, and family members worked summers in the melon patch. They could eat all the melons and cantaloupe they wanted and were always fed a huge meal cooked by Mom, Collene and the daughters-in-law. Some customers would also benefit from these meals if their timing was right. Monty and Linda met in high school, then married December 30, 1961. They have two sons, Mark and Jared who were influenced by the values of hard work and honesty which was Monty’s way of life. Monty was baptized in July 1953 and was presented with a Bible, which he treasured, stating that he had memorized all the books of the Bible. Monty enjoyed reading the Bible, which he had read from cover to cover, preferring the Old Testament, the prophecies of our savior Jesus Christ, and the hope of a heavenly home he would someday enjoy. Monty graduated high school in 1958. He was in the army from 1962-1964. He was a member of the American Legion Post 0152. He became a member of the Aline Methodist Church. Monty was always generous with his time for anyone who asked. His generosity, work ethic, and sense of humor accompanied him regardless of the situation. Family and friends were accustomed to his easy-going quiet nature and distinctive laugh. He was quick to recognize and point out the humor he saw in everything. Monty’s grandchildren were his pleasure. Jared Austin and Madison Renee, and a bonus “redhead” Audrey. Mark and Alycesyn added Ian Michael with the bonus of Ashton and Chandler. He was so proud of the fine, good adults they became, having the same values that were instilled in him. It is impossible to convey 80 years of accomplishments, and the pleasure he took in his farming, cattle, and most of all, his family. Besides his parents, he was preceded in death by two brothers, Bob Shelite and Leonard “Buck” Shelite. Monty is survived by his wife, Linda, of Aline; two sons, Mark Shelite and his wife, Alycesyn, of Parsons, Kansas, and Jared Shelite of Ormond Beach, Florida; six grandchildren, Ian Shelite of Parsons, Kansas, Ashton Clemens of Kansas City, Chandler Clemens of Newport, California, Audry Baxter of Savannah, Georgia, Jared Shelite of Jacksonville, Florida, and Madison Shelite of Ormond Beach, Florida. Also surviving are two brothers, Larry Shelite and his wife, Earlene, of Aline, and Garry Shelite and his wife, Beverly, of Hennessey; one sister, Collene Weber and her husband, Lawrence, of rural Aline; two sisters-in-law, Lorinda Shelite of Enid, and Patti Shelite of Fort Cobb; other relatives and many friends. Memorial contributions may be made through the mortuary to Aline Methodist Church.

The family of Monty Ray Shelite created this Life Tributes page to make it easy to share your memories.

Graveside services for Monty Shelite will be 1:00 p.m. Saturday,...

Send flowers to the Shelite family.