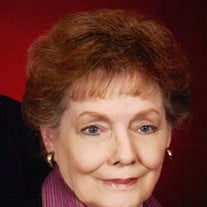 Myrna Lynn Edwards Woltz, 76 years old, passed away August 27, 2015, in Odessa, Texas. She was born on July 28, 1939 in Cheyenne Valley, Oklahoma to Paul Edwin Edwards and Olive Violet Bolson Edwards. When Myrna was 5 years old they moved to Alva, Oklahoma where Myrna and her older brother Jerry grew up. Myrna graduated from Northwestern Oklahoma State University in Alva, Oklahoma where she was a member of Sigma Sigma Sigma sorority. While there, Myrna met the love of her life Paul Dean Woltz. Myrna and Paul were married on May 27, 1960 in Alva, Oklahoma. A marriage that lasted for over fifty-one years. They moved to Oklahoma City, where Paul worked on his masters at The University of Oklahoma Medical School. Soon, fate brought them to Odessa, where they quickly took root and remained until present. Myrna entered the workforce, but became a stay at home mother when Jeff and Jason were born. As they grew older, she started working with Paul at Shield, Inc. which he was one of the founders. After the company was sold, she continued to work at several companies as a bookeeper/accountant until retiring. Service to the community was another priority Myrna enjoyed. Soon after arriving to Odessa, she became a member of The Junior League of Odessa and the Epsilon Mu Chapter, No. 1986, of Epsilon Sigma Alpha International. She later served as Chapter President of Epsilon Sigma Alpha International from 1970 - 1971. When The Junior League took on The Odessa Day Nursery as a special project, she became heavily involved even serving as their board treasurer for many years. One of her great passions was politics. Myrna was always eager to volunteer for state and national campaigns and reminisced about volunteering for President George Bush’s Senate campaign. She could always be seen helping at the election pols where she helped serve as a judge for many years. Myrna was also a member of Mission Dorado Baptist Church. Myrna was preceded in death by her father Paul Edwards, mother Violet Edwards, husband Paul Woltz and sister-in-law Kay Edwards. SURVIVORS: Sons Jeff Woltz and Jason Woltz, both of Odessa; brother Jerry Edwards of Columbia, MO; niece Pam Budd and her husband Dan of Kansas City, KS; nephew Paul Edwards of St. Louis, MO; cousins Marita Bolson of Council Grove, KS; Olive Jean Bolson of Emporia, KS; Jane Anne Pratt of Dallas and Mark Whitlaw of Edmond, OK and many other relatives. Services will be held at Mission Dorado Baptist Church on Wednesday September 2, 2015 at 2:00 PM. Interment will be Saturday September 5, 2015 in Waynoka, OK at 2 PM. Honorary Pallbearers will be Max Anderson, Darrell Bode, Dean Linder, Charles Like, David Simpson, Jeff Melton, Bubba Saulsbury and Veldon Woolley. The family request that instead of flowers, a donation be made to: The United Way of Odessa P.O. Box 632 Odessa, Texas 79760 Services are entrusted to Frank W. Wilson Funeral Directors and Marshall Funeral Home of Waynoka, LLC.

The family of Myrna Lynn Woltz created this Life Tributes page to make it easy to share your memories.

Send flowers to the Woltz family.