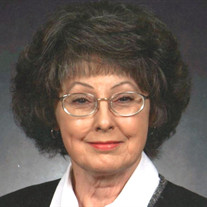 Memorial services for Nancy Sue Case will be 2:00pm Monday, February 5, 2018, at the First United Methodist Church in Alva with Rev. Dr. Carol Cook Moore officiating. She was cremated at her request under the direction of Marshall Funeral Home of Alva.Nancy Sue Case, daughter of the late John Frederick and Lorene Mildred (Sharp) Barnes, was born April 8, 1942, in Alva, Oklahoma, and passed away January 30, 2018, in Alva, at the age of 75 years, 9 months, and 22 days. Nancy attended Farry Public Schools in northwest Woods County, and the Alva Public Schools in Alva, graduating with the Class of 1960. On July 15, 1961, Nancy married Bob Case at the Methodist Church in Alva. To this union their daughter, Natalie Sue, was born. Nancy and Bob have lived their married life in a home in Alva. She was a member of the Alva First United Methodist Church, where she served as an usher, was in charge of acolytes for several years, and was a member of the Hannah Circle of the UMW. She was an animal lover and never met a cat she didn’t like. Besides her parents, she was preceded in death by her cousin, Neal Kilmer. Nancy is survived by her husband, Bob, of the home; their daughter and husband, Natalie and Timothy Gifford of Farmington, New Mexico; her sister and husband, Peggy and Ron Mapes of Alva; her brother, John H. Barnes of Edmond; and sister-in-law, Betty Harris of Ponca City; nephews and spouses, Jeff and Michelle Mapes of Alva, Todd and Kimberly Mapes of Rogers, Arkansas, Anthon Davison of Villahermosa, Tabasco, Mexico; a niece and husband, Arlene and Kim Stauffer of Ponca City; her cousin, Barbara Hiett of Alva; other relatives and many friends. In lieu of flowers, the family asks that you please make contributions to the American Diabetes Association, the Oklahoma Medical Research Foundation for Diabetes research, the Alva First United Methodist Church, or Creature Concerns of Alva.

Memorial services for Nancy Sue Case will be 2:00pm Monday, February 5, 2018, at the First United Methodist Church in Alva with Rev. Dr. Carol Cook Moore officiating. She was cremated at her request under the direction of Marshall Funeral Home... View Obituary & Service Information

The family of Nancy Sue Case created this Life Tributes page to make it easy to share your memories.

Send flowers to the Case family.