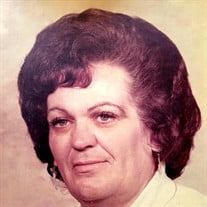 Graveside services for Nancy Lee Woodard will be 1:00 p.m. Friday, January 14, 2022, at the Waynoka Municipal Cemetery with Rev. Paul Kirk officiating. Interment is under the direction of Marshall Funeral Home of Waynoka, LLC. Nancy Lee Woodard, daughter of the late Thomas Braxton and Helen Maxine (Cox) White, was born April 13, 1939, in Wellington, Kansas, and passed away January 10, 2022, in Alva, Oklahoma, at the age of 82 years 8 months, and 27 days. Her mother later married Bill Robinson who thought of Helen’s kids as his own. Nancy grew up in Alva and attended Alva Schools. In 1958, she was united in marriage to Charles Thomas Woodard. She worked for the Santa Fe Railroad as a maid until they quit changing crews in Waynoka. She then worked as a cook for Miller’s Café until her retirement. She enjoyed working any kind of puzzle, including Find a Word, Jigsaw puzzles, and Crossword puzzles. Besides her parents, she was preceded in death by one sister, Dolores Zook. Nancy is survived by two sons, Ricky Woodard and his significant other, Lorena Crabb of Waynoka, and Gerald Woodard and wife, Zayne, of Clovis, New Mexico; one daughter, Helen Woodard of Clovis, New Mexico; and one sister, Roberta Curtis of Annabella, Utah. Also surviving are 9 grandchildren, Tamara Sena and husband, Solomon, Michael Woodard and wife, Brandy, Cassandra Martin and husband, Derek, Kashe Miller and wife, Vangie, Keaton Miller and wife, Monica, Ashlee Duran and husband, Manuel, Justin Woodard, Stefan Smith, and Heather Smith; 17 great grandchildren, with another due in February; other relatives and friends. Memorial contributions may be made in her memory to the funeral home.

Graveside services for Nancy Lee Woodard will be 1:00 p.m. Friday,...

Send flowers to the Woodard family.