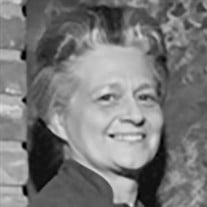 Nelda Jean Schupbach Ott was born February 12, 1924, the daughter of Sam and Rose (Frieden) Schupbach. And she slipped into the loving arms of her Savior April 24, 2020. For the health and safety of family and friends, memorial services will be held at a later date. Cremation arrangement are under the direction of Marshall Funeral Home of Alva. At the time of her birth in Burlington Oklahoma she was the fourth of six children. She graduated from Burlington High School where she was active in basketball, tennis, drama, forensics, music and was valedictorian of her class. After graduation she moved to Wichita, Kansas to attend business school. She was offered a job at ALCOA Aluminum Company of America so she decided to go to work full time. The all women office staff, referred to as the “ALCOA” girls worked with engineers and the airplane plants to convert plans and orders to use the lighter weight aluminum parts on the aircraft. During this time she also completed Red Cross training and volunteered at Wesley Hospital. After the war she returned to Kiowa working as the bookkeeper at the Chevrolet-General Motors dealership. On November 13, 1947 she was united in marriage to Arnold George Ott. They were blessed with two children, Sam and Sandra. Nelda became a member of the Apostolic Christian Church on August 5, 1951. Her church family was very important to her and she was a very active member of the church. For a number of years she and Arnold would host visiting church families with a meal or a place to stay while they visited the area. Together, Nelda and Arnold raised their two children in the Burlington area and built a strong farming and ranching operation that was recognized for its diverse farming practices. Nelda enjoyed working part-time as a bookkeeper for Hood Lumberyard the family business of her sister-in-law Esther and brother-in- law Dale Hood. During this time she drew the house plans for her dream home that was built in Burlington Oklahoma. The plans were so precise that the builder did not have to adjust any dimensions or make any changes. Nelda spent many hours cooking for harvest crews that came to the area and was active in Home Demonstration Club, FFA Mother’s Club and was a 4-H leader. She also worked for the Alfalfa Election Board during county elections after she and Arnold retired in the Byron Fish Hatchery area. Arnold and she then made Alva their home. Nelda was an avid reader and encouraged her children to also develop a love of reading. At times she would complete one her children’s indoor chores instead of interrupting their reading. In her fifties and sixties she started writing poetry and several of her poems were published. She also enjoyed writing poems for each one of her siblings, children and grandchildren. She and her husband Arnold shared a love of wildlife and in particular birds. Nelda just preferred to watch them from inside. They always lived in a home that the backyard was open to a field and birdfeeders were kept full. Nelda’s three grandchildren Craig, Derrick and Bethany were the light of her life and she loved hearing about all their activities. She was so proud of them and her great grandson Byram. Nelda was preceded in death by her parents, her beloved husband Arnold, her cherished daughter-in-law Glenna, her siblings and their spouses Doris and Dan Kokocanovich, Richard and Barbara Schupbach, Leon and Frieda Schupbach, brother - in- law Ronald Nelson and sister-in-law Elna Mae Schupbach. She was also preceded in death by her Ott sister and brother-in-laws. She is survived by her son Sam Ott of Norman, Sandra Ott Hamilton of Alva, grandchildren Craig Hamilton of Tyler, Texas, Bethany Hamilton of Enid, Derrick and great grandson Byram Ott of Oklahoma City, sister and best friend Shirley Nelson, brother Milferd Schupbach, loving caregiver Kathi Harvey, many nieces , nephews and other family members. The family requests that memorial contributions may be given to a charity of choice.

Nelda Jean Schupbach Ott was born February 12, 1924, the daughter of Sam and Rose (Frieden) Schupbach. And she slipped into the loving arms of her Savior April 24, 2020. For the health and safety of family and friends, memorial services... View Obituary & Service Information

The family of Nelda Jean Ott created this Life Tributes page to make it easy to share your memories.

Send flowers to the Ott family.