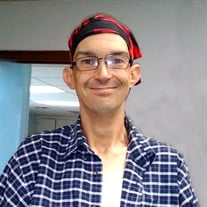 Memorial services for Nicholas Ervin will be 2:00 p.m. Wednesday, December 6, 2017, at Beadles Nursing Home with Rev. Nathan Braudrick officating. Cremation arrangements are under the direction of Marshall Funeral Home of Alva. Nicholas Scott Ervin, son of Jessie Earl Jr. and Linda Elaine (Gray) Ervin, was born October 3, 1980, at Oklahoma City, and passed away December 3, 2017, at Alva, at the age of 37 years and 2 months. Nicholas grew up in Oklahoma City, Calera, and Yuba and resided in Duncan before moving to Alva six months ago to be near his sister. He was a member of the First Baptist Church in Duncan. He was an avid wrestling fan, enjoyed cartoons, especially Sponge Bob, and playing Mario Brothers with his nephews. He also enjoyed going to The Menagerie and especially seeing the camel. Going to the LFA wrestling match at the Firelake Arena in August was a highlight of his life. Preceding him in death are his grandparents, Jessie and Jewel Ervin, Sr. He is survived by his parents, Jessie and Linda Ervin of Durant; two brothers, Jason Ervin and wife, Michelle, of Durant, and Shawn Ervin of Tulsa; one sister, Ashley Brinkley and husband, James, of Alva; nephews and nieces, Benjamin, Catherine, Rebekah, Joshua, Emily, Bethany, Joseph, Blakelyn, Aiden, Asher, and Avaleigh; other relatives and friends. In lieu of flowers, memorial contributions may be made to Beadles Nursing Home, 916 Noble St, Alva, OK 73717.

The family of Nicholas Scott Ervin created this Life Tributes page to make it easy to share your memories.

Memorial services for Nicholas Ervin will be 2:00 p.m. Wednesday,...

Send flowers to the Ervin family.