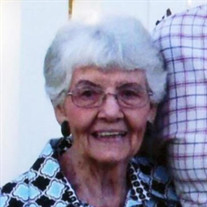 Funeral services for Nina (Turner) Newell Sheppard will be 10:30 a.m. Wednesday, March 4, 2020, at the Marshall Funeral Home Chapel with Rev. Dr. Carol Cook Moore officiating. Interment will be 2:30 p.m. Wednesday in the Stafford Cemetery in Stafford, Kansas, under the direction of Marshall Funeral Home of Alva Nina Lee (Turner) Newell Sheppard, daughter of the late Thomas and Verda (Barker) Turner, was born October 5, 1930, in Sylvia, Kansas, and passed away February 29, 2020, in Alva, Oklahoma, at the age of 89 years, 4 months, and 24 days. Nina graduated from Sylvia High School in Sylvia, Kansas. She was united in marriage to Dean Lee Newell at the Methodist Church in Sylvia. The couple moved to Stafford, Kansas, where they raised their family. They later moved to Hutchison, Kansas, where she worked at Calhoun’s Clothing and later as a buyer for women’s sports wear at Pegue’s Clothing. Her husband, preceded her in death. After she retired in 2003, she moved to Alva. She was a member of the Methodist Church in Hutchinson, Kansas, and attended the First United Methodist Church in Alva. She was a big basketball fan and loved the Kansas Jayhawks and the Oklahoma City Thunder. She loved the outdoors, gardening, tending flowers, and she always had a beautiful, well manicured yard. She dearly loved her family and her grandchildren. Besides her parents, she was preceded in death by her husband, Dean; two brothers, Milton Turner and Clinton Turner. Nina is survived by two children, Mike Newell of Maize, Kansas, and Deb Kline and husband, Stan, of Alva, Oklahoma; four grandchildren, Heather Kline of Alva, Andrea Zuniga and husband, Alex, of Wichita, Alicia Newell of Wichita, and Michael Newell and wife, Courtney, of Caldwell, Kansas; seven great grandchildren, Jordan, Lauren, Dominic, and Sofia Zuniga, and Marissa Finley, all of Wichita, Kansas, and Miles and Ava Newell of Caldwell, Kansas; one sister-in-law, Thoreen Turner, of California; several nieces and nephews; her extended family at Beadle’s Nursing Home; other relatives and friends. Memorial contributions may be made through the funeral home to Beadle’s Nursing Home Activity Fund or the Alva First United Methodist Church.

The family of Nina (Turner) Newell Sheppard created this Life Tributes page to make it easy to share your memories.

Funeral services for Nina (Turner) Newell Sheppard will be 10:30...