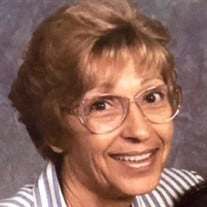 Funeral services for Norma Avalon Hufford will be 2:00 p.m. Saturday, May 6, 2017, at the Green Valley Free Methodist Church. Interment will be in the Carmen Cemetery under the direction of Marshall Funeral Home of Alva. Norma Avalon Hufford, daughter of the late Albert Ellis and Edith (Shaddy) Littrell, was born February 18, 1943, at Alva, Oklahoma, and passed away April 27, 2017, at Monroe, Washington, at the age of 74 years, 2 months, and 9 days. Norma attended the Prairie Bell School at Aline and Aline High School before graduation from Alva High School. She attended some college then attended cosmetology school. She lived in Weatherford and Alva before moving to Monroe, Washington, where she lived the last few years. She was a member of the Green Valley Methodist Church. She enjoyed reading and flower and plant gardening. She also did a lot of volunteer work for the Republican Party. Besides her parents, she was preceded in death by two brothers, Pete Littrell and George Littrell; and one sister, Wanda Goins. Norma is survived by three sons, Sterling Hufford of Elk City, Sheldon Hufford and wife, Virgie, of Monroe, Washington, and Shane Hufford of Weatherford; one daughter Shannon Brinkley of Weatherford; four brothers, Donald Littrell and wife, Ramona, of Custer, Washington, Dolphie Littrell and wife, Lennie, of Wichita, Kansas, and Bill Littrell and wife, Rene, of Cleo Springs; three sisters, Barbara Kletke of Alva, Peggy VanMeter and husband, Larry, of Dacoma, and Alberta Littrell of Aline. Also surviving are ten grandchildren Michael Hufford and Shyanne Hufford, both of Elk City, Joy Hufford, Courtney Hufford, Benaiah Hufford, Uriah Hufford, and Jeremiah Hufford, all of Monroe, Washington, Alexandria Harrison and Colby Brinkley, both of Weatherford, and Destiny Hufford of Weatherford; and one great grandchild, Audrey Hufford; Tammy Hufford and Joe Brinkley, other nieces, nephews, relatives and friends. Memorial contributions may be made through the funeral home to the Green Valley Methodist Church.

Funeral services for Norma Avalon Hufford will be 2:00 p.m. Saturday, May 6, 2017, at the Green Valley Free Methodist Church. Interment will be in the Carmen Cemetery under the direction of Marshall Funeral Home of Alva. Norma Avalon Hufford,... View Obituary & Service Information

The family of Norma A. Hufford created this Life Tributes page to make it easy to share your memories.

Funeral services for Norma Avalon Hufford will be 2:00 p.m. Saturday,...

Send flowers to the Hufford family.