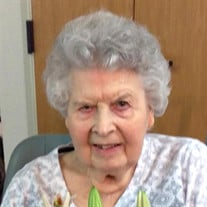 Graveside services for Norma Jean Kelsey will be 10:00 a.m. Saturday, July 15, 2017, at Memorial Hill Cemetery north of Waynoka, Oklahoma with Rodney Guy officiating. Interment is under the direction of Marshall Funeral Home of Waynoka LLC. Norma “Jean” Kelsey, formerly of Waynoka, a current resident of Enid, Oklahoma was the daughter of John Henry Hull and Grace (Johnson) Hull. She was born January 19, 1926, at the family farm southeast of Waynoka, Oklahoma, and passed away July 11, 2017, in Enid, Oklahoma, at age of 91 years, 5 months, and 22 days. Jean grew up in the Walnut Grove Community and attended grade school at Walnut Grove. She began piano lessons at an early age, played French horn in Waynoka High School Band and ended up with organ lessons. She was quite active in 4-H Club—taking honors in sewing and baking. She did a lot of horseback riding while helping on the farm. While in 4-H Club, she showed a steer which was raised on the family farm. She graduated from Waynoka High School and attended American Business College in Wichita, Kansas. She worked as a Secretary at Boeing Aircraft Company in Wichita, Kansas, until V-J Day and the subsequent cancelling of the B-29 Contract. Following this, she attended Oklahoma A&M College (now Oklahoma State University) in Stillwater, OK. On November 30, 1946, she was united in marriage to Jack Bill Kelsey (her highschool sweetheart) at Wellington, Kansas, in the home of Judson Woodbridge. They made their home on the family farm north of Waynoka for 18 years before moving to Waynoka in 1964. She worked side by side with her husband in their cattle and farming operation. She was active in Rose Valley Home Demonstration Club and Rose Valley Progress Club. The couple was blessed with a wonderful son, Jeff. He was their pride and joy. She and her husband, Jack, were active members of Oklahoma Flying Farmers. They flew to many local meetings and get-togethers as well as State and National Conventions. Jean was Oklahoma Flying Farmer Queen in 1960 and made that memorable solo flight in a Cessna 150 on July 4, 1960. She was awarded the Amelia Earhart Pendant by the 99’s Chapter. When Jack became President of Oklahoma Farmers Union, they made their home in Bethany, Oklahoma, for 8 years and upon Jack’s retirement, moved back to their hometown of Waynoka. Jean and Jack loved to travel. Besides the traveling they did while Jack was President of Oklahoma Farmers Union—attending National Conventions, etc. they made two Caribbean Cruises, two trips to Switzerland, two trips to Mexico, one trip to Alaska, one European trip, one trip to the Bahamas and three trips to Hawaii as well as trips in their motor home. She worked as secretary at Whiteneck Clinic in Waynoka for 5 years. She operated Oklahoma Farmers Union Insurance Co. Agency at Alva, Oklahoma, for 8 years and held a Real Estate License. She was a member of the Church of Christ in Waynoka, Northwest Church of Christ in Oklahoma City, Northside Church of Christ in Waynoka, and Garriott Road Church of Christ in Enid Besides her parents, she was preceded in death by her two brothers, Claude Cecil Hull, Clifford John Hull, and her husband, Jack. Jean is survived by her son, Jeffrey Scott Kelsey of Savannah, Georgia; granddaughter, Rachael Kelsey, and one great granddaughter, Isabelle Wilburn of Savannah, Georgia, one niece, nephews, other relatives and many friends. Memorial contributions may be made through the funeral home to Search Television Ministry, Edmond, Oklahoma.

The family of Norma Jean Kelsey created this Life Tributes page to make it easy to share your memories.

Graveside services for Norma Jean Kelsey will be 10:00 a.m. Saturday,...

Send flowers to the Kelsey family.