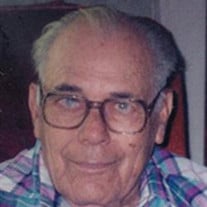 Funeral services for Norman Denzil "Nan-Nan" Yadon will be 2:00 p.m. Friday, April 13, 2007, at the Waynoka First Baptist Church with Rev. David Shaw officiating. Interment will be in the Alva Municipal Cemetery under the direction of Marshall Funeral Home of Waynoka, LLC. Norman will be at Marshall Funeral Home in Alva until Wednesday evening, then at Marshall Funeral Home in Waynoka from Thursday morning until 12:30 p.m. Friday. Norman Denzil Yadon, son of the late John Nelson and Mabel Ethel (Glover) Yadon, was born May 23, 1913, in Meade County, Kansas, and passed away April 9, 2007, at his home in Waynoka, at the age of 93 years, 10 months, and 17 days. Norman attended school at Rolla, Kansas. On November 10, 1932, he was united in marriage to Mildred M. "Darcy" Tubbs at Richfield, Kansas. They owned a cream station where they sold milk, cream, and produce, and also they were involved in the poultry business. They lived in Thomas, Oklahoma, before moving to Seiling in 1947 and Alva in 1949. He lived most of the rest of his life either in Alva or Waynoka. After retiring from the milk and poultry business, he worked as a motel manager or apartment manager as long as his health would permit. He was raised in the Methodist Church. He and Darcy loved square dancing. He loved all types of sports, especially the Atlanta Braves baseball team. Besides his parents, he was preceded in death by his wife, Darcy; two brothers, Marion Yadon and Don Yadon; and one sister, Louise Steward. Norman is survived by one son, Bob Yadon and his wife, Beverly, of Waynoka; one daughter, Jo Davison and her husband, Bob, of Alva; one brother, John Yadon and his wife, Melba, of Decatur, Illinois; and two sisters, Martha Johnson and her husband, Don, of Eugene, Oregon, and Veta Gilchrist and her husband, Don, of Seiling, Oklahoma. Also surviving are eight grandchildren, Deena Crocker of Rolla, Missouri, Bob Servis and his wife, Lori, of Garden City, Kansas, Darris Servis and his wife, Mary, of Woodward, Debrena Garnett and her husband, Jerry, of Alva; Bob Yadon, Jr., and Cheryl, of Princeton, Texas, Bryon Yadon of Waynoka, Brenda Beck and her husband, Brad, of Waynoka, and Bonnie Smith and her husband, 1st Lt. Rusty Smith, of Fort Riley, Kansas; three step grandchildren, Roger Davison of Alva, Ron Davison and his wife, Myra, of Alva; and Renita Heinrichs of Alva; 20 great grandchildren; 4 step great grandchildren; 5 great great grandchildren; other relatives and friends. Memorial contributions may be made through the funeral home to the Waynoka EMTs or the American Cancer Society.

Funeral services for Norman Denzil "Nan-Nan" Yadon will be 2:00 p.m. Friday, April 13, 2007, at the Waynoka First Baptist Church with Rev. David Shaw officiating. Interment will be in the Alva Municipal Cemetery under the direction of Marshall... View Obituary & Service Information

The family of Norman Yadon created this Life Tributes page to make it easy to share your memories.

Funeral services for Norman Denzil &quot;Nan-Nan&quot; Yadon will be 2:00...

Send flowers to the Yadon family.