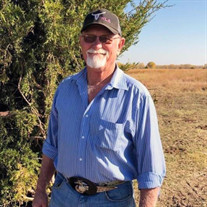 Kim Kimbro passed onto his next home December 23, 2021 at the age of 72, living his life to the fullest until the the last minute on his farm. Kim was born in Waynoka and loved living in Woods County. After high school he tried his hand at college, but it wasn’t for him. After that he followed in his family’s footsteps and became a Marine, making it to E5 within a very short time and gained the highest level of marksmanship. Most of his time in the service was spent in California and Japan, and he had many stories to tell from his adventures. His service was an honor he carried his entire life as anyone that knew him could see by the belt buckle he always wore. After leaving the Marines he returned to Waynoka where he met the love of his life Debbie Eggleston and they were married within the year. Kim began working for the Santa Fe Railroad like his father and grandfather, starting on the paint gang and quickly became a bridge Forman. A few years into their marriage, after being blessed with their oldest two children Tisha and Brett, they decided to buy the farm in waynoka to raise their kids. Kim would joke that he had to go back to work to rest as his weekends were spent working hard on the farm. Then the family all decided we needed another person to love, so we had another baby as Dal was born. Our family of five was now complete. Just as much as he worked hard, he enjoyed making time with his family taking breaks, fishing, and shooting. We all enjoyed being outdoors and the farm was always our haven. Poppy was an amazing grandpa. He would spend time loving on the grand babies playing on the floor when they were little and talking with them as they grew. Each of his nine grandchildren were special to him in their own way. Kim was like an encyclopedia. Any information he gleaned from various sources was often topic in his many conversations as he could make conversation with anybody. He never met a stranger. Poppy could also make or repair anything that was broken on the farm or at work and was always ready to help his family with their many projects. His entire family is heartbroken but better people because he was with us for so long. Kim would like for all of us to honor him by taking a kid fishing, hunting or teaching them about firearms. Kim’s wishes were for his wife and children to have a private celebration of life at a later date.

Kim Kimbro passed onto his next home December 23, 2021 at the age of 72, living his life to the fullest until the the last minute on his farm. Kim was born in Waynoka and loved living in Woods County. After high school he tried his hand at... View Obituary & Service Information

The family of Omer Dewayne "Kim" Kimbro created this Life Tributes page to make it easy to share your memories.

Send flowers to the Kimbro family.