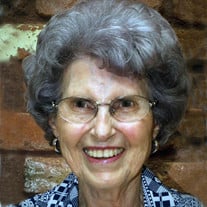 Funeral services for Orpha Grace Goss will be 1:30 p.m. Monday, January 22, 2018, at the Carmen Christian Church with Pastor Kirk Board officiating. Interment will be in the Carmen City Cemetery under the direction of Wentworth Mortuary, LLC. Orpha Grace Goss, daughter of the late Henry Emerson and Sylva Irva (Gadberry) Morrison, was born September 18, 1922, on the family farm north of Waynoka, and passed away January 19, 2018, in her home in Carmen, Oklahoma, at the age of 95 years, 4 months, and 1 day. Orpha attended Rose Valley School through 8th grade, attended Waynoka Schools through her junior year, and graduated from Carmen High School with the Class of 1940. On August 30, 1941, she was united in marriage to Robert James Goss in Enid, Oklahoma. During World War II, they lived in Gary, Indiana, where she worked as an overhead crane operator. They returned to Carmen where they farmed, ranched, and operated the Carmen Livestock Exchange. She was a member of the Carmen Christian Church. Her interests include gardening, quilting, and cooking. Besides her parents, she was preceded in death by her husband, Robert; one granddaughter, Kami Steele; and two brothers, Gerald and Clifford Morrison. Orpha is survived by one son, Robert “Bobby” Goss and wife, Margaret, of Carmen; one daughter, Sharon Knoll and husband, Bob, of Plano, Texas; four grandchildren, Kenzie Knoll of Plano, Texas, Erica Irlbeck and husband, Scott, of Lubbock, Texas, Erin Meier and husband, Tyler of Edmond, Evin Zabaneh and husband, Tony, of Independence, Belize; one grandson-in-law, Mike Steele, of Keller, Texas; six great grandchildren, Brittan and Landry Steele, Jett Irlbeck, Sloan and Vonn Meier, and Tripp Zabaneh; other relatives and friends. Memorial contributions may be made through the funeral home to the Carmen Christian Church or the Playground Fund at the Park.

Funeral services for Orpha Grace Goss will be 1:30 p.m. Monday, January 22, 2018, at the Carmen Christian Church with Pastor Kirk Board officiating. Interment will be in the Carmen City Cemetery under the direction of Wentworth Mortuary, LLC. Orpha... View Obituary & Service Information

The family of Orpha Grace Goss created this Life Tributes page to make it easy to share your memories.

Send flowers to the Goss family.