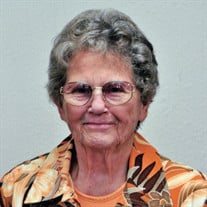 Funeral services for Patty Lou Nusser will be 3:00 p.m. Saturday, August 19, 2017, at the College Hill Church of Christ with Jay Tyree officiating. Interment will be in the Alva Municipal Cemetery under the direction of Marshall Funeral Home of Alva. Patty Lou Nusser, daughter of the late John and Ethel (Holt) Lakely, was born July 10, 1933, in Alva, Oklahoma, and passed away August 15, 2017, in Alva, at the age of 84 years, 1 month, and 5 days. Patty attended Alva School. On December 29, 1950, she was united in marriage to Dean Nusser. They moved to the farm south of Hopeton, then later moved a few miles down the road to a farm southwest of Hopeton. In later years, they moved to a home north of Alva. To their union were born a daughter, Carolyn Sue and twin sons, Doyle Dean and Dale Gene. Besides raising her children, she helped her husband out with the farm and custom harvesting business. In between cooking meals, she could often be found on a tractor or in a wheat truck. She was known for her fabulous cooking skills and introduced many a young men to her famous fried bread and delicious pies. She loved nature, whether it was watching the birds and other wildlife in the yard and at the bird feeder, or collecting and identifying wildflowers and rocks. She always had her camera ready and took lots of photos. Her grandchildren remember her for all the fun times that they had, whether creating a project, looking at wildflowers or walking to the bone pile. She was a longtime member of the Church of Christ where she helped with the Warmth for Winter program. She was also a member of the Alva Iris Club. She also spent many hours and traveled many miles researching her family’s geneology. Besides her parents, she was preceded in death by a son, Doyle; a grandson, Ricky Lee Baird; a brother, Johnnie; three sisters, Beulah Zalewski, Alva “BeBe” Nusser Eslick, and Margaret Phisgoda; her brother-in-law, Stanley Holt; and her sister-in-law, Jerilyn Lakely. Patty is survived by her husband, Dean, of Alva; her daughter, Carolyn Baird and husband, Rex, of Waynoka; her daughter-in-law, Jean Nusser, of Alva; her son, Dale Nusser and wife, Brenda, of Alva; five grandchildren, Sherry Baird Shklar and husband, Michael, of Waynoka; Carissa Nusser of Alva, Derek Nusser of Alva, Shannon Nusser and wife, Heather, of Alva, and Shelley Reidy and husband, Marcus, of Edmond; granddaughter-in-law, Michelle Baird; two sisters, Delphia Ridgway of Pasadena, Texas, and Kathy Lakely Holt of Kiowa, Kansas, and twin brothers, Douglas Lakely and wife, Janet, of Alva, and Dennis Lakely of Enid; her step mother, Lora Lakely Parker of Alva; 17 great grandchildren, Andrew and Conner Baird, Mary, Austin and Cody Shklar, Jacoby Merrill, Cadence Nusser, Dakota Lane and Payden Nusser, and Adelynne, Evan, and Erin Reidy, Ethan, Logan, and Bailey Nusser, Laci Sandefur, and Chelci Klusmeyer; other relatives and friends. Memorial contributions may be made through the funeral home to the Alva Public Library. Remembrances may be shared with the family at www.marshallfuneralhomes.com.

Funeral services for Patty Lou Nusser will be 3:00 p.m. Saturday, August 19, 2017, at the College Hill Church of Christ with Jay Tyree officiating. Interment will be in the Alva Municipal Cemetery under the direction of Marshall Funeral Home... View Obituary & Service Information

The family of Patty Lou Nusser created this Life Tributes page to make it easy to share your memories.

Funeral services for Patty Lou Nusser will be 3:00 p.m. Saturday,...

Send flowers to the Nusser family.