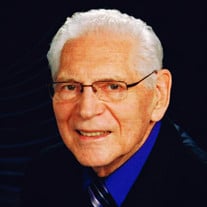 A memorial graveside service will be held at the Alva Municipal Cemetery in Alva at 2:00 p.m., Saturday, April 21, 2018, with Rev. Dr. Carol Cook Moore officiating. A reception will follow at 3:00 p.m. in the Fellowship Hall of First United Methodist Church of Alva. Paul Lee Fettke was born on July 12, 1932, in Galena, Missouri, and raised in Alva, Oklahoma. He passed away of heart failure on March 23, 2018, in Dallas, Texas at age 85. Paul was the youngest child of Herbert Phillip Fettke and Vera (Melear) Fettke. His father Herbert was an attorney and Justice of the Peace in Alva, Oklahoma, and passed away in a car accident in 1936. Paul’s mother, Vera, was left on her own and worked as a secretary to support her four children. Vera married Claude O. Nickell of Alva in 1965, and she passed away in 1975 after a long illness. Paul was also preceded in death by his two brothers, Merle Glenn Fettke and Richard Ivan Fettke; and his sister, Norma Belle Wittmer. Paul graduated from Alva High School in 1950, and attended college at Northwestern Oklahoma State University in Alva, earning a Bachelors of Science degree in Mathematics in May 1954. He went on active duty with the Navy Reserves in June 1954 and was stationed at Glenview Naval Air Station in Illinois until June 1956. Paul married Catherine Wilcox on June 24, 1956, at the First United Methodist Church in Alva, Oklahoma, and their first child, David Paul Fettke was born November 2, 1961, in Dallas, Texas. Their second child, Douglas Lee Fettke, was born on July 21, 1963, in Dallas. For most of his career Paul worked in the computer industry as a programmer and technical support specialist for several companies including Boeing, Burroughs, Methodist Hospital of Dallas, and the Dallas Independent School District. Paul also completed graduate level studies at the University of Dallas. He retired in 1998. Paul was a lifelong Methodist and an active member of Christ United Methodist Church in Farmers Branch, Texas up until his death. Paul is survived by his wife of 61 years, Catherine Wilcox Fettke; two sons, David Paul Fettke of Dallas, and Douglas Lee Fettke and his wife, Adrian, of Paris, Texas; three grandchildren, Lane, Luke, and Lauren; and numerous friends and family. Memorial contributions may be made through the funeral home to the First United Methodist Church of Alva.

A memorial graveside service will be held at the Alva Municipal Cemetery in Alva at 2:00 p.m., Saturday, April 21, 2018, with Rev. Dr. Carol Cook Moore officiating. A reception will follow at 3:00 p.m. in the Fellowship Hall of First United... View Obituary & Service Information

The family of Paul Lee Fettke created this Life Tributes page to make it easy to share your memories.

A memorial graveside service will be held at the Alva Municipal...

Send flowers to the Fettke family.