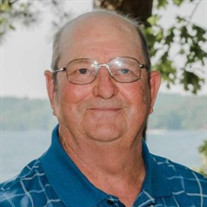 Memorial services for Paul Nutter will be 3:00 pm, Saturday, October 30, 2021, at the First Baptist Church of Waynoka. Inurnment will be in the Memorial Hill Cemetery under the direction of Marshall Funeral Home of Waynoka. Paul David Nutter was born November 27, 1949, as the eleventh child of Albert and Abbie Nutter at Clapper Memorial Hospital in Waynoka, Oklahoma, and passed away October 21, 2021, at Garfield, Kansas, at the age of 71 years, 10 months, and 24 days. He attended Rose Valley School where he was taught by his older sister, Alberta Bissantz until the ninth grade when he transferred to Waynoka High School. He married Pamelia Young in June 1966, and his son Matthew Paul was born in 1967. He graduated from Waynoka High School in 1968. He attended Northwestern Oklahoma State University for two years, and he had numerous vocational certificates for electronics and mechanics. In October of 1970, his daughter, Patricia Gail, was born. In 1993, Paul and Pamelia divorced, and he later met Becky Cope who was his wife until her death in 2018. He was preceded in death by his wife, Becky Cope; one son, Matthew Paul Nutter; a stepdaughter, Amanda Hall; his parents, Abbie and Albert Nutter; two sisters, Francis and her husband, Russell Geary, and Alberta and her husband, Louis Bissantz; five brothers, Pete and wife, Ruth Nutter, Jim and wife, Lena Nutter, Allen and wife, Emma Lou Nutter, Aaron and wife, Dell Nutter, Ray and wife, Jenny Nutter; and one sister-in-law, Lois Nutter. He is survived by a daughter, Patricia and husband, Kevin Ford, of Garfield, Kansas; a stepdaughter, April Stackhouse of Waynoka; three granddaughters, Autumn and husband, Ryan Weir, of Hillsboro, Kansas, Katie Inman of Waynoka, and Hope Hall of Alva; four grandsons, Cameron Smith of Wichita, Kansas, Blake Inman of Waynoka, Lane Inman of Waynoka, and Johnny Hall of Alva; and two great grandchildren, Kreaklynn and Boone Inman of Waynoka. Also surviving are two brothers, Larry and wife, Jean Nutter, of Crescent, and Don Nutter of Waynoka; one sister, Linda and husband, Dan Strohmeyer, of Waynoka; numerous nieces and nephews and a host of other family and friends. Memorial contributions may be made through the funeral home to the American Kidney Fund.

Memorial services for Paul Nutter will be 3:00 pm, Saturday, October 30, 2021, at the First Baptist Church of Waynoka. Inurnment will be in the Memorial Hill Cemetery under the direction of Marshall Funeral Home of Waynoka. Paul David Nutter... View Obituary & Service Information

The family of Paul David Nutter created this Life Tributes page to make it easy to share your memories.

Memorial services for Paul Nutter will be 3:00 pm, Saturday,...

Send flowers to the Nutter family.