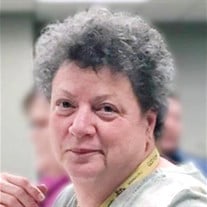 Memorial services for Peggy Dianne Burk will be 2:00 p.m. Saturday, January 5, 2019, at the Alva First Christian Church (Disciples of Christ) with Pastor Ron Pingelton officiating. She was cremated at her request under the direction of Marshall Funeral Home of Alva. Peggy Dianne Burk, daughter of the late Billy Gene and Lorraine (Baker) Burk, was born May 7, 1956, in Alva, Oklahoma, and passed away January 1, 2019, in Oklahoma City, at the age of 62 years, 7 months, and 24 days. Peggy graduated from Alva High School. She furthered her education while attending Northwestern Oklahoma State University and graduated with a double major in Library Science and History. She started work in the food service industry at Colonial House and Beeler’s Café, then as dietician at Beadles Nursing Home. Peggy began her career with the Oklahoma Department of Corrections at the Charles E. Bill Johnson Correctional Center on November 26, 2004, as a Food Service Specialist IV and on January 25, 2008, she was promoted to Food Service Manager I. Peggy was routinely voted as employee of the month over her 14 years of service. In 2018, she was voted on by her peers as the Support Staff Member of the Year for BJCC. Peggy was very deserving of this award but was also very aggravated at us as humility was also one of her great qualities. Peggy had a soft spot for strays and took care of many. This usually meant animals but occasionally this would also include humans that needed a little kindness too. Peggy volunteered many hours at Beadles nursing home playing games and engaging in activities with the residents. She also volunteered her time preparing meals for her church organization that provided meals for those in need. She was a member of the Alva First Christian Church. Her sassy sense of humor often helped those around her get through some very tough times and always made working around her a joy. She was respected by one and all that worked with her. Generous, kind, compassionate, smart and forever funny are just some of the words that would describe Peggy. She touched the lives of all that knew her. Besides her parents, she was preceded in death by her brother, Larry. She is survived by several friends whom she considered family, including Brenda Johnson, Danny and Shelly Bouziden, Shannon Bouziden Squires, Chase Bouziden, Allen J and Thelma Crouch, Linda Crouch Kidd, Tony Crouch, Linda Bouziden, Loran Bouziden, Bentley Bouziden, Tim McCullouch; and many other friends. Memorial contributions may be made through the funeral home to the First Christian Church (Disciples of Christ) Foyer Fund or Creature Concerns.

Memorial services for Peggy Dianne Burk will be 2:00 p.m. Saturday, January 5, 2019, at the Alva First Christian Church (Disciples of Christ) with Pastor Ron Pingelton officiating. She was cremated at her request under the direction of Marshall... View Obituary & Service Information

The family of Peggy Dianne Burk created this Life Tributes page to make it easy to share your memories.

Memorial services for Peggy Dianne Burk will be 2:00 p.m. Saturday,...

Send flowers to the Burk family.